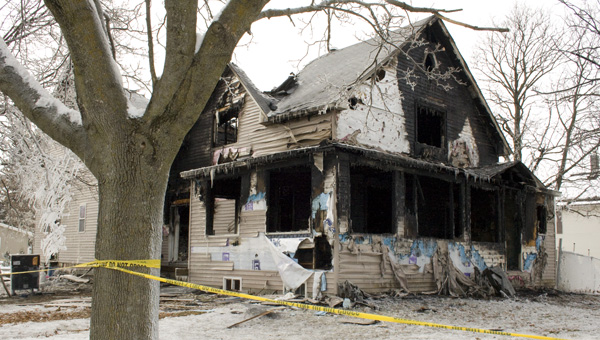 The house at 403 Fifth Ave. W. sits blackened the morning of Dec. 7, 2011, after two fires were reported there earlier that morning. — Sarah Stultz/Albert Lea Tribune

ELLENDALE — An Ellendale couple is facing multiple charges in Steele County District Court for allegedly starting their own house on fire two times in the same night a year and a half ago.

The house, at 403 W. Fifth Ave., was left uninhabitable by the blaze and has remained standing — blackened by fire — since the day of the incident on Dec. 7, 2011. Investigators with the State Fire Marshal’s Office and the Steele County Sheriff’s Office previously stated they were suspecting arson in the case.

The couple, who owned Maggio’s Pizza in Ellendale and Mystic Pizza in Lonsdale at the time of the fire, have four children.

Court documents state investigators reportedly found inconsistencies in the couple’s statements regarding what had taken place the night of the fires and discovered they were reportedly in the middle of financial difficulties.

Ellendale firefighters were initially called to the house at 1:53 a.m. Dec. 7 after receiving a report that the house was full of smoke. Misgen had just reportedly returned to the residence.

Court documents state when firefighters arrived they found a small fire in the kitchen, which they were able to extinguish. They ventilated the house and then left at about 2:45 a.m. after it was deemed safe.

At 3:53 a.m., firefighters responded back to the house after receiving a 911 call from a passer-by who observed flames coming from the windows of the house. By the time firefighters arrived, the main floor and second floor of the north side of the house were engulfed in flames. No one was home.

When questioned about the happenings of the night, investigators found inconsistencies in statements made by both Misgen and his wife.

In one inconsistency, Misgen reportedly stated he had received a call that night from an employee at Mystic Pizza who was having trouble locking a door, but when interviewed by police, the employee denied having talked to him. Phone records also show Misgen had no incoming calls from the employee.

Degen-Misgen reportedly said in an interview that she went to two different McDonald’s in Albert Lea with the children that night at 9:30 and 10:30 p.m. and then later to Owatonna where she purchased duct tape.

The kids stayed out past 1 a.m., even though they had to attend school later that day, court documents state. After the first fire was reported, they were reportedly taken to a relative’s house.

Degen-Misgen later admitted in an insurance claim that she purchased isopropyl alcohol in Owatonna, which can be used as an accelerant for fire, the report stated.

Investigators found that the two fires were not related and there was no evidence to show that the second fire was a continuation of the first.

They concluded that the second fire was intentionally set and started in a closet that shared a wall with the kitchen.

Court documents state a neighbor told authorities that they saw the Degen-Misgen’s vehicle pull up across the street from the house at about 2:45 a.m. after firefighters had left from the first fire, and Misgen could be seen talking to the occupant in the car and then running to the house. The neighbor said he could see Misgen “monkeying around” inside, and he reportedly left at about 3:15 a.m.

The two were the last people identified in the residence before the house was fully engulfed in flames, according to the investigation.

Why would they have burned down their own house?

According to court documents, the Misgens were behind on their mortgage and were paying double payments to get caught up. They reportedly still owed $124,000 at the time of the fire and had had their natural gas service cut off in June of 2009 for nonpayment.

In addition, they owed about $160,000 between the two businesses, had a personal judgment against them for $36,329 from Produce State Bank in Albert Lea and Misgen was reportedly $7,700 behind on child support payments.

He was also required to pay $150 each month for a restitution obligation in Dakota County in a case where authorities said he used customer credit card numbers through two Ellendale businesses to create fake credit cards. He was ultimately convicted of receiving stolen property and had an outstanding balance of $3,415 in restitution at the time of the fire. He had been scheduled for a probation violation hearing Dec. 21, 2011, for failure to pay the restitution.

The court records stated the Misgens did not occupy much of their house and only heated a portion of it with electric space heaters.

The couple reportedly submitted an insurance claim to Farmer’s Mutual Insurance after the fire on Dec. 12, 2011, and were given $3,000 by the insurance carrier for temporary living expenses. Up to $612,000 was covered under the policy.

In March of 2012 the couple submitted a proof of loss for $395,000. The policy stated, “If you or any insured intentionally cause a loss to property covered under this policy, this policy shall not apply.”

An interview with a prison inmate

Investigators in January of 2012 received a letter from Misgen’s co-defendant in the Dakota County case, who at the time was an inmate in an Arizona prison.

James Michael Johnson, who was convicted of felony identity theft, told investigators that Misgen had talked with him in 2007 about how he was having financial difficulties and needed to make some quick cash.

Johnson alleged Misgen asked him if he knew anything about insurance fraud and fires. He wanted to know how house fires were investigated.

The couple is slated to appear in court on the charges on Aug. 19.