ST. PAUL  — The rise of the roundabout in Minnesota is helping explain a drop in serious crashes.

There are 115 roundabouts statewide, with another 39 planned or under construction. They’re used in place of right-angle traffic crossings.

Ken Johnson of the Minnesota Department of Transportation points to the state’s first roundabout near New Prague. 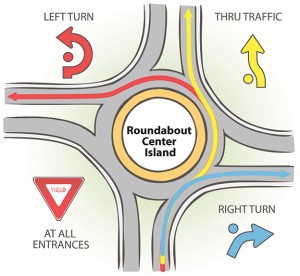 Roundabouts allow cars to make their turns without stopping but requiring them to slow down. –North Dakota Department of Transportation

Before it went in, the intersection was the site of two deaths and 50 injury-causing accidents in five years. Since the roundabout was installed seven years ago, there have been no fatalities and only four injury crashes.

“The data show that they are the safest intersections we have,” Johnson said.

That meshes with U.S. Department of Transportation statistics that show roundabouts reduce fatalities by 90 percent. Around the country, multilane roundabouts have roughly the same number of accidents as signal-controlled intersections but 70 percent fewer injury-causing accidents.

The explanation rests with physics. At a traditional intersection, a motorist ignoring a signal can crash into the side of another vehicle, the most vulnerable part.

“Roundabouts eliminate that kind of crash,” said Washington County engineer Wayne Sandberg. When drivers enter a roundabout, they slow their cars. So if there is a collision, it is most likely to be among cars headed in the same direction.

The experts also highlight the effect of roundabouts on traffic flow. Cars travel through roundabouts an average of 10 seconds faster during rush hour, Johnson said. Because cars don’t come to a complete stop, there is less pollution from idling vehicles.

But the circular intersections don’t work everywhere. They require more land and don’t tend to work on intersections where one roadway carries significantly more traffic than the one crossing it.

The costs to build one aren’t much different than a standard intersection controlled by a stoplight — about $1 million to $1.5 million.