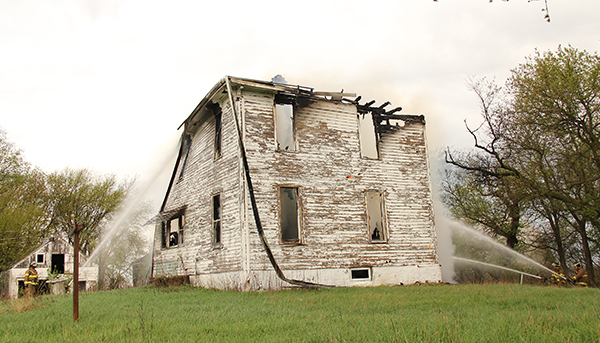 Blooming Prairie firefighters battled the blaze at 89544 320th St. in light rain with the help of water from the Geneva Fire Department.

The cause of the fire has not yet been determined.

Blooming Prairie Fire Chief Dean Naatz said the initial call of the fire came in just before 9 a.m. by a passer-by. When firefighters arrived at the scene, the house was fully engulfed in flames.

The house, which is in Newry Township but is in the Blooming Prairie department’s territory, is a total loss as only two walls of the two-story home remained standing later that morning.

However, the house had been empty for some time, Naatz said.

No one was injured in the incident.

The fire will likely be investigated by the State Fire Marshal’s Office or the Freeborn County Fire Investigation Team.