KIESTER — The Kee Kafe served between 130 to 140 dinners during its grand opening May 6.

Half of all proceeds from opening night were donated to Kiester for a Cure, a local nonprofit group that raises money to help local people affected by all types of cancer. 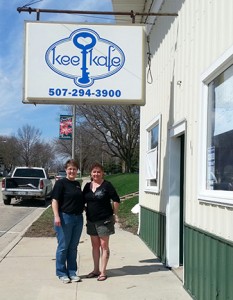 “We felt it was a great way to get involved with the community while supporting a worthy cause,” said Michelle Knutson, co-owner of the Kee Kafe. “We were surprised by the amount of people who volunteered that evening to help us clean off tables, cook and even Kiester for a Cure helped with the dishes. We couldn’t have pulled it off without the community’s help.”

She and Tammy Henthorne purchased what used to be the old Brickhouse Pizza building around mid-March. Three years ago, when Brickhouse Pizza closed, John and Tammy Henthorne had looked at the building within a month of when Knutson had also viewed the property, but neither realized the other was interested, even though they were all good friends. They only knew that they couldn’t make a café work alone, so neither party made a move on the property.

About six months ago, they each looked at the property again after realizing the other party was interested.

“We just kept talking and kept talking once we realized we were both interested until we finally decided to just do this,” said Knutson.

Because the building sat empty for 3 1/2 years, the Henthornes and Knutson had a lot of work to do before their opening. According to Knutson, the trio set a deadline as they began to work on cleaning, painting, gutting the basement, completing duct work and bringing the electrical up to code.

“There was a lot that needed to be done,” John said.

Between John and Knutson, the two cover chef duties for breakfast, lunch and supper. Knutson does baked goods such as wedding cakes, graduation cakes, cupcakes and catering. The Kee Kafe hosted its first private catering party, a groom’s supper, on Friday, rounding out a great first week of business.

While Knutson is originally from Wells, Tammy grew up in Kiester and as a result, developed a personal connection to the Kee Kafe’s building as a young child.

“I was friends with Roger Oldfather’s stepdaughter. He was the owner of the Maple Café at that time,” said Tammy. “The family lived upstairs, so at night we’d come down to the restaurant and basically play restaurant once it closed. When we got tired, we’d crawl into our sleeping bags and sleep on the window benches. My aunt was the breakfast cook, so when she’d come in the next morning, she’d wake us up and send us upstairs.”

In the future, Knutson and Henthorne would like to work cooperatively with local businesses for instance, developing a dinner and movie night or maybe even a dinner and bowling night. This fall, beginning around Labor Day, the Kee Kafe is considering opening its doors on Saturdays. If this happens they will remain open on Saturdays through Memorial Day.

“We feel this is something that our town needed. We have several places to get a pizza in town, but there really isn’t a place to get a good home-cooked meal until now,” said Knutson.