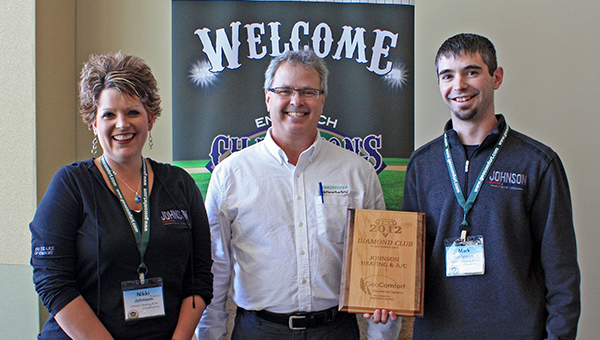 The company won both the 2012 Commercial Project of the Year (Western region) Award and the 2012 Diamond Club Award, a geothermal sales recognition. The honors were given on April 23 and 24 by Geocomfort, which is the geothermal brand that Johnson Heating & Air Conditioning uses.

Both Owner Kevin Johnson and Project Engineer Mark Johnson said it was an honor to receive the awards, especially since they were chosen for project of the year out of the entire western half of the United States. Awards are given out each year to dealers that have creative, unique designs that are also energy-efficient. 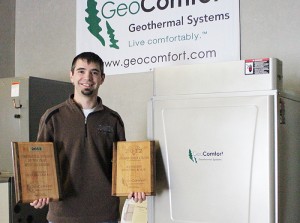 “It’s nice to be recognized for the energy-efficient concepts we try to strive for,” Mark said. “With every project we try to make it the most efficient.”

This is the third Project of the Year Award the company has received, all in four years. A previous award was won for their geothermal system at Wedgewood Cove Golf Club. The project that won them the 2012 Commercial Project of the Year was their recent work with Asmus Farm Supply, an agriculture chemical dealer, of Rake, Iowa. Johnson said the company had a 2-year-old building that had about 16 furnaces and air conditioners. The building had about 20,000 square feet and some glass walls. Johnson said that trying to keep the place a comfortable temperature meant the company was consuming a lot of propane and the costs were adding up. The company called Johnson Heating & Air Conditioning to install a geothermal system.

The system includes 16 pumps that either send hot air into the geothermal underground loop fields where it is then cooled, or it sends cold air through the same system to have it heated. Johnson said it’s a similar system to the one they installed at Wedgewood Cove, and it’s the same in that it is self-sufficient. It sends cooler air to warmer part of the building without first sending it through the underground system, which adds up to even more energy savings.

Johnson said geothermal systems use about 50 to 70 percent less energy than traditional heating and cooling systems because the only power used is electricity to run the pumps that transfer air through the ducts and underground loops.

Their ability to design and install geothermal systems means more customers, both residential and commercial, are looking at the system as an option. Geothermal systems can cost more up front, but they bring in more energy savings down the road. There’s also a federal tax credit and rebates from energy companies that can make the cost less dramatic. The company has been installing about 20 to 30 a year since 2008, when geothermal became more popular. 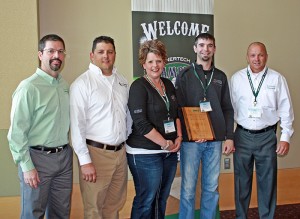 “Geothermal is getting to be 30 to 40 percent of our business,” Kevin said. “It’s really started to gain momentum.”

On the horizon are several larger residential projects, but workers have to wait for the snow to disappear before starting those. The company has 11 employees and is looking for two more. It celebrated its 100th anniversary last year.