Going the distance in the outfield

Albert Lea center fielder Makael Lunning has been making plays all over the outfield this season. Lunning has also taken a leadership role on the team. — Micah Bader/Albert Lea Tribune

Opponents of the Albert Lea baseball team have been robbed all season.

On a consistent basis, that familiar shot to center field that looks like it’ll fall safely to the ground for a base hit has been falling into Makael Lunning’s glove instead.

After Albert Lea’s 2-1 win Tuesday over Austin, assistant coach Jay Enderson described Makael’s play in the outfield with a question.

“Did you see that catch in right center?” he asked. “That’s Makael. He covers a ton of ground.” 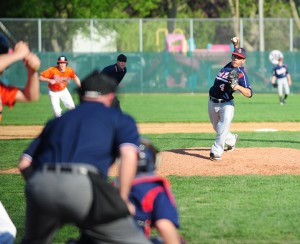 Makael Lunning of Albert Lea throws a pitch against Winona. Lunning’s favorite position is in center field, but he entered the Tigers’ pitching rotation for the betterment of the team. — Micah Bader/Albert Lea Tribune

“I just do everything I can to catch every ball that’s hit in my direction,” Makael said.

Makael has improved production in each facet of his game, Enderson said.

“His fielding has always been good and is getting better,” he said. “His hitting is improved, and he’s been a vocal leader.”

Part of being a team leader includes a willingness to help in any capacity.

Against Winona, Makael switched from his favorite position — center field — to take the pitcher’s mound.

The Tigers, like most other prep teams in Minnesota, had many games postponed. Many schools like Albert Lea rescheduled the missed games as doubleheaders, and managers can cruise through a pitching rotation with an abundance of back-to-back games.

“I haven’t pitched much this year,” Makael said. “It was more of a step in when you’re needed type of thing.”

According to Jennifer Lunning, Makael’s mother, he has been playing baseball since fifth grade.

“He’s always been a big sports fan,” she said. “He’s been good friends with Ethan Abben and Dylan See-Rockers since they were little tikes.”

“A bunch of my friends played baseball back in the day, Makael said. “I just wanted something to do, so I started playing.”

Prior to his days with the Tigers, Makael played T-ball with the Parks and Recreation Deptartment.

Makael’s favorite player is Andrew McCutchen of the Pittsburgh Pirates.

“He plays the same position that I play, and he’s fun to watch,” Makael said.

However, instead of the MLB, Makael will be shooting for the National Football League. He will attend the University of St. Thomas in Minneapolis in the fall to study business and finance and play football, Jennifer said.

Besides looking to professional athletes like McCutcheon for inspiration, Makael said he looks to his teammates.

“It’s just a team thing,” he said. “It’s about not letting your teammates down.”

Enderson said Makael has done the opposite of letting the Tigers down.

The Tigers built momentum headed into sections. Lunning and fellow captain, See-Rockers, are hoping to make a run.

“It’s been a fun year so far, and hopefully we can finish it out strong,” he said.