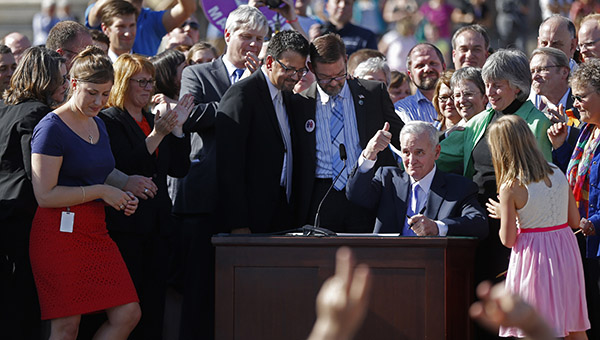 “What a day for Minnesota!” the Democratic governor declared, as American and rainbow flags flapped in a sweltering hot wind. The Minnesota State Patrol estimated about 6,000 people made up the massive crowd, and many headed to downtown St. Paul afterward for a street party celebrating the bill’s passage.

Dayton’s signature on the bill ended an intense two years for gay marriage supporters and opponents in this Midwestern state, which swung from a failed push to constitutionally ban same-sex weddings into a successful bid to becoming the 12th state to affirm them.

Watching over Dayton’s shoulder as he signed the bill were the measure’s two chief sponsors, Rep. Karen Clark and Sen. Scott Dibble. For them, it was vindication for a long and sometimes demoralizing struggle for gay rights.

“I thought it would happen someday, but I didn’t know I would be able to be here to be part of it,” Clark said Tuesday, a few hours before the ceremony. Clark can now marry her partner of 24 years, in the only state she’s ever lived.

The longest-serving openly gay lawmaker in the country, Clark, 67, had already been out of the closet for a decade when she was elected to the Legislature in 1980. She grew up on a farm in Rock County, in the state’s southwestern corner, and came out to her parents, now both dead, in her mid-20s.

“The very first thing my mother said was, ‘I will always love you,”’ Clark recalled.

In 1993, her by-then elderly parents marched with her in the Minneapolis gay pride parade a few weeks after she led the effort to extend Minnesota’s civil rights protections to gay people.

But by 1997, the same Legislature passed the “Defense of Marriage Act,” which restricted marriage to only opposite-sex couples. A year later, Clark introduced a bill to repeal it and allow gay marriage.