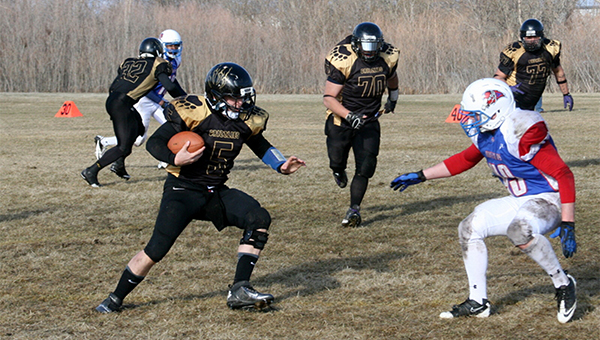 Albert Lea quarterback Eric Grabowski rushes the ball while Michael Polinder races across the line of scrimmage to throw a block. — Submitted

The Albert Lea Grizzlies football team improved to 1-0 on the season with an 8-6 win April 13 over the Tri-State Buffalos.

In the opening quarter, the Grizzlies struck first on a 22-yard touchdown pass from Tony Tolbers to Spencer Niehbuhr. The two-point conversion was good on a run by Tolbers, and Albert Lea took an 8-0 lead. 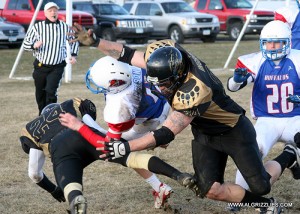 Kaelyn Kohtz, left, and Anthony Ingram of the Albert Lea Grizzlies make a tackle against the the Tri-State Buffalos. — Submitted

The Buffalos rallied in the third quarter with a punt return for a touchdown by Tate Bork. However, the Grizzlies were able to keep a small cushion, because Tri-State’s two-point conversion failed. The Buffalos had another chance to take the lead later in the third quarter, but Albert Lea’s Spencer Niebuhr blocked a field goal.

“We all wish him well and pray for a speedy and complete recovery,” he said.

Jason Kuipers led the Grizzlies’ ground attack with 149 yards rushing. Niebuhr led the recieving corps. with 44 yards and a touchdown. He also added a blocked field goal and a sack.

“Our offense is really coming together, and we learned some things from this game that are going to make us better,” Schmidt said. “We just need to finish our drives and quit leaving points on the field.”

“The defense was strong, not allowing them to score offensively and just doing a great job overall,” Schmidt said.

The Buffalos are an expansion team this season, and Schmidt said he was impressed with their level of sportsmanship, organization and discipline.

“It was our pleasure to welcome them into the SPFL, and we look forward to many more competitive matchups down the road,” he said.

Next, Albert Lea plays at the South Central Hawgs at 7 p.m. Saturday.