Grizzlies take down Wildcats to earn 1st win of season

After a scoreless first quarter, the Grizzlies lit up the scoreboard halfway through the second with a 1-yard run by Spencer Niebuhr. Niebuhr scored again on the ground for the two-point conversion to give the Grizzlies an eight-point lead. 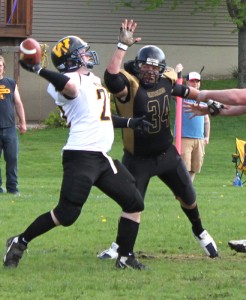 Anthony Ingram of the Albert Lea Grizzlies applies pressure to the quarterback for the Buffalo Ridge Wildcats. The Grizzlies won 28-7 to earn their first victory of the season. — Submitted

The Wildcats struck back with about seven minutes left before halftime to cut the Grizzlies’ lead in half.

Tony Tolbers hit Gerdes on a 41-yard touchdown pass, and late in the third, he connected with Colton Zuniga on a 12-yard pass to give Albert Lea a 28-7 lead.

“We had a great game, and we got the passing offense rolling,” Albert Lea offensive lineman Craig Schmidt said. “We got everyone involved and everyone contributed.”

Jason Kuipers broke the century mark rushing with 108 yards, and Tolbers led the Grizzlies’ passing attack with 231 yards through the air. Overall, the Grizzlies are 1-2.

Next, Albert Lea will host the Minnesota River Valley Shock at 5 p.m. June 1.

“Everyone is looking forward to continuing our winning streak,” Schmidt said.