Helen and Frank worked together throughout their married life, farming together in Freeborn following World War II. In 1955, when Frank accepted the position of Freeborn County Veterans Service Officer in Albert Lea, Helen became his office manager until she retired in 1970. 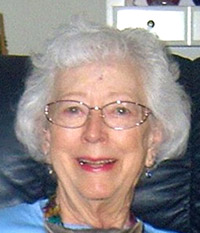 After Frank retired in 1978, Helen and Frank traveled throughout the southwestern United States and settled in Tucson, Ariz., from 1986 to 1995. They moved to Salem, Ore., in 1995 where they resided together until Frank’s death in 2005.

Helen enjoyed shopping, crafting and playing her organ during her more active years. Later, she found great pleasure with her cat, Iris, who remained with her at her bedside and who misses her greatly.

Burial will be scheduled later this summer at Graceland Cemetery in Albert Lea. Memorial donations can be made to the charity of your choice and remembrances can be sent to: