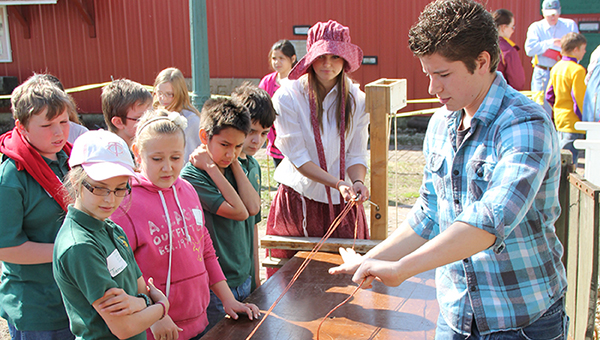 They may seem like outdated skills, rope making and corn grinding, but area fifth-graders were more than happy to try them out during Discover History Days at the Freeborn County Museum.

The 16th annual two-day event was Tuesday and today. Juniors with Jim Haney’s humanities class taught local fifth-graders all about early pioneer life in the museum and village. Junior Anna Anderson is one of the first students who also attended as an elementary-schooler.

“I remember coming here as a fifth-grader and liking it,” Anderson said.

Anderson and fellow student Corbin Schultz were helping younger students learn how to make rope. One fifth-grader from St. Theodore Catholic School said she enjoyed the chance to try something new. 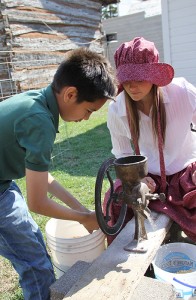 “We are grinding corn into animal feed,” Hanna Sack said.

The juniors taught the younger students that settlers often had to grind corn by hand to feed cattle or sheep.

”From farming to religion to being a blacksmith, there were lots of different things to learn. Karli Kriewall and Tiffany Johnson were indoors teaching the youngsters all about cooking and house chores. 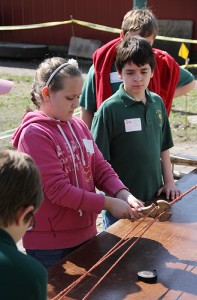 Hanna Sack helps make a rope while her classmates look on during Discover History Days at the Freeborn County Historical Museum.

They asked the students how they thought settlers were able to cook, curl their hair or shave their faces. Then they had the students take turns carrying an egg to the general store to trade for some flour. The activity showed the students that goods were more scarce then.

“Then we let them make pancakes,” Kriewall said.

Kriewall, a senior, was helping out the class because one section of Humanities had about 21 juniors, so a couple more volunteers were needed. Haney said it was a benefit because the students had already done the activity before. And though the weather and moisture in the ground were a bit of a headache, Haney said the whole project was going well.

“I think all the kids are learning something — fifth-graders and my kids — and that’s the key,” Haney said.