In the nick of time 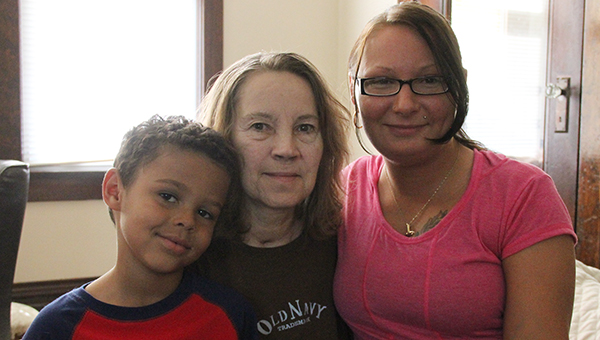 An Albert Lea boy most likely saved his grandma’s life when he thought to call 911 after she fell outside their home on March 22.

Jayden Dawes, 7, and his grandma, Sandy, 64, were walking up the steps to the front door when Sandy fell down three steps into a snowbank. She had ragged breathing and was unconscious. Later at the hospital, her family found out Sandy’s heart had stopped.

“It’s lucky there was snow where she landed,” Jayden said.

Sandy was watching Jayden for the night because his mom, Michelle, went to the Twin Cities. Sandy had asked Jayden to hold her cell phone while they climbed the stairs. When he saw that she had fallen, Jayden called her name repeatedly and thought he should call 911, but he was pretty upset.

“I couldn’t see — my eyes were filled with tears,” Jayden said.

As soon as he could, he dialed 911 and told the dispatcher that his grandma had fallen and wouldn’t answer him. Jayden knows now that his grandma had suffered a heart attack — her fourth — right before she fell. Jayden said the police and ambulance crew were nice, but the ordeal was overwhelming.

“I felt like I was going to have a heart attack myself,” Jayden said.

Lt. Jeff Strom of the Albert Lea Police Department was one of the officers who arrived to help. He said firefighters and an ambulance crew also responded.

“Medical began CPR as she was in cardiac arrest and got a heartbeat back,” Strom said.

Strom took Jayden to his squad car so they could call his mom, and Strom remembers Jayden being worried about his grandma.

“He was pretty scared his grandma was going to leave him,” Strom said.

Michelle raced back to Albert Lea as fast as she could after she heard what happened. She had a friend look after Jayden until she got back to town. She remembers that staff at Mayo Clinic Health System in Albert Lea tried to get a heartbeat and pulse from her mom, but that they weren’t having any luck. Sandy was then airlifted to Rochester.

“They kept her in hypothermia for 24 hours and gave her a paralytic,” Michelle said.

Then there were nine harrowing days that Sandy was in a coma, and Michelle was worried her mom wasn’t going to make it. Doctors asked Michelle to consider taking Sandy off life support machines, but Michelle said she could see signs of life in her mom. Not knowing each day if her mom would wake up was tough.

“It was very difficult to see her like that,” Michelle said.

But then on the ninth day of her coma, which was both Easter Sunday and Sandy’s birthday — March 31 — Sandy awoke. That was just the start of her rehabilitation, which is still ongoing. Sandy was in the hospital for 6 1/2 weeks and now lives with Michelle who, with help from friends, is caring for her around the clock.

Michelle knows how lucky it was that Jayden was with his grandma when she had the heart attack and that he knew to call for help.

Jayden and his grandma are close-knit, and Jayden said he was worried about her and didn’t want to lose her.

“She’s the best grandma in the world,” Jayden said.