In through the back door 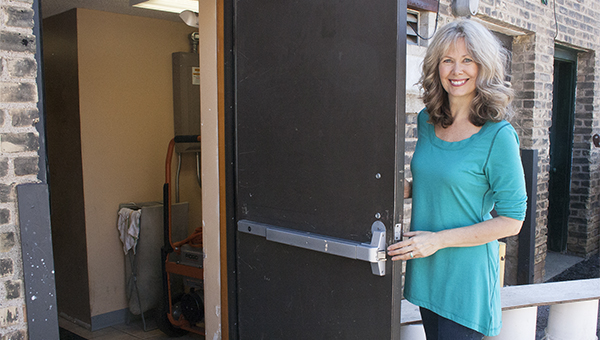 Lori Larsen, manager of 112 on Broadway, gestures into the business Thursday morning. As the downtown reconstruction moves south down Broadway, business owners are looking for ways to attract customers to their rear entrances as front-door access will be limited. –Sarah Stultz/Albert Lea Tribune

With front-door access to their businesses to be limited by the Broadway reconstruction this summer, downtown business owners are brainstorming ways to reassure customers they are still open — just through the back door.

Construction on the more than $4 million project began in May at the north end of Broadway and will move south down the street as the summer progresses.

The project includes the replacement of the street, sidewalk and underground utilities on Broadway from Fountain Street to Main Street. Decorative lighting, crosswalks, kiosks, trees and tree grates will be added, along with basic pedestrian plazas at William and Water streets. 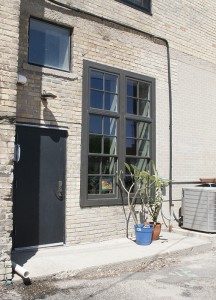 Kirk Foley, owner of Prairie Wind Coffee, has plans to spruce up the back entrance to his business as downtown construction will soon limit access to his front door. He said he plans to put up a sign, plants and seating to make the entrance more welcoming.

Fountain Lake Park at the north end of Broadway will also undergo a reconstruction with the addition of a grand staircase leading from Fountain Street to a sidewalk promenade in the park, a handicapped accessible sidewalk and a new boat dock on the lake.

Though no front-door access is currently affected, it is only a matter of time.

Kirk Foley, owner of Prairie Wind Coffee, said he is excited about the work taking place and already has some ideas to attract people to his business through the rear entrance of the Jacobson Building.

“We’re going to clean ours up,” Foley said, noting he plans to have a sign mounted, put plants outside and even move at least one table outside near the back door.

“My feeling has been all along, if I was a retailer, I would be concerned, but as a coffee shop owner I’m not,” he said. “My true belief is the enhancements coming after are going to far outweigh the downfall.”

Down the street, Linda Knudsen, owner of Plymouth Shoes, has plans to spruce up both the back side and the front of her business. 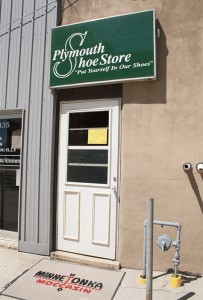 Linda Knudsen, owner of Plymouth Shoe Store, has plans for a new back door and other upgrades to bring customers into her business this summer during the Broadway reconstruction.

In the back she hopes to install a new bronze-colored door, a new sign and even plans to re-stucco around the back entrance.

“We’re going to make this a welcome area,” she said.

The entrance will be accented with a welcome mat and a few pots of flowers.

She applied for and was awarded grants from the city for both the back and front entrances.

“I’m excited and nervous at the same time, but I think my customers know we’re here,” Knudsen said.

Kathy Sabinish, co-owner of Frames-R-Us, is being creative with her approach to her business.

In the middle of the last block of the project, she said she doesn’t think her business will be affected as long.

“We’re going to stay open as much as possible, but when it’s really impossible to get here, we might go on a vacation or do a home improvement project,” Sabinish said.

She plans on putting in new stairs to her back door, though she said she is also willing to meet people on the corner with their projects if they don’t want to walk to her business in the alley.

In addition to individual efforts from the business owners, the Albert Lea-Freeborn County Chamber of Commerce is joining with other area businesses to offer free food and other events to draw people downtown.

Look to the Tribune for more information about these events in the coming weeks.