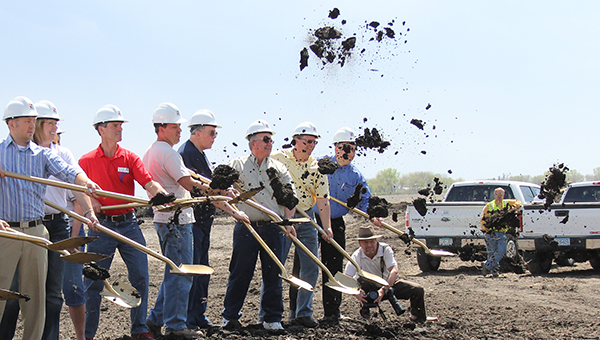 Dirt is thrown during a groundbreaking ceremony for United South Central in Wells on Wednesday. — Kelli Lageson/Albert Lea Tribune

That was the sentiment echoed by many who attended the groundbreaking for the new school building on Wednesday in Wells. Dirt is already being moved to make way for all the construction that’s about to begin on the United South Central building that will house kindergartners through 12th-graders.

“It’s actually happening,” school board member Mike Schrader said. “We’ve been talking about it for many, many years.” 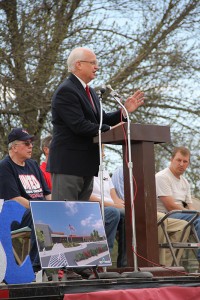 The decision for a new school came about last August during an election. The majority of voters approved building a new school that has a $28 million price tag. Superintendent Jerry Jensen told the crowd that included community members and more than 600 students that make up the district that the students should be thankful for the taxpayers who are making the school possible.

There was much debate regarding the new school. The board held several community meetings and has been discussing having a new school building for years. The vote that decided the issue was not a landslide, with 57 percent voting for the new school, and Jensen recognized this in his speech.

“Your community has really stepped up for you,” Jensen said.

Jensen recognized both Wells Concrete for its $75,000 donation of materials and Bevcomm for its $100,000 donation for technology upgrades. The superintendent also said it was purely coincidental that the groundbreaking was on May 15, when a portion of property taxes are due.

“In a way it’s fitting,” Jensen said. “This will be paid for by the taxpayers of this district and we all need to be very thankful for that.”

There were nine student speakers ranging in age from 5th grade to 11th grade, and all took the time to talk about what they were most excited to see in the new building. School board Chairwoman Kathy Krebsbach said the board wanted to be inclusive of the communities that make up USC, which include Wells, Easton, Freeborn, Kiester, Bricelyn and Walters.

“I’m in awe this whole thing is happening,” Krebsbach said. “What a fantastic collaboration of communities.” 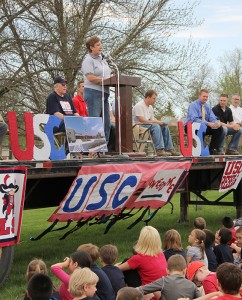 United South Central school board chairwoman Kathy Krebsbach speaks to the crowd Wednesday during a groundbreaking ceremony for the new school building in Wells.

Teachers, staff and students came to view the groundbreaking, and community members were invited as well. Ila Teskey, who was a proponent of the new school before the election, said she was glad to see that the district is keeping all the students together in one place.

“I’m so happy we got the school,” Teskey said.

And students who won’t even get to attend the new school are still excited about the change in the community. Junior Veronica Schindler, who played in the marching band during the ceremony, said that even though she wouldn’t get to attend classes at the new building that it’s still good for USC.

“Our building is falling apart,” Schindler said. “A new building will bring a sense of pride to our school.”

The ceremony ended with students, district staff and workers with construction company Kraus-Anderson all taking turns shoveling dirt in the field where the school will be built. It’s located off Ninth Street and Sixth Avenue inside the city limits of Wells.

About the new school

A referendum was held Aug. 14, 2012, and the majority of voters were supportive of a new school. The oldest part of the current building was built in 1932, with additions in 1933 and 1961. The current building has a host of plumbing, air quality and size issues. The district has an average of 600 students enrolled each year.

The new building will be 155,000 square feet and is designed by Minneapolis-based architects SGN/Wendel. It will be built on almost 67 acres on the south side of Wells on the western side of Minnesota Highway 22. The new facility will have the capacity for 750 students.

All building contracts are expected to be awarded by the end of May. Then a final construction cost will be available. Right now, the board expects the entire project to cost $28.825 million. Students will attend school in the new building at the start of the 2014-15 school year.