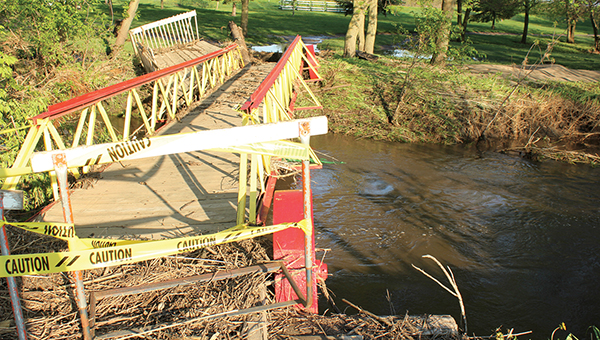 DEXTER — Tammy Westrich is no stranger to devastation, and the reaction is the same each time.

The co-owner of Beaver Trails Jellystone Park Camp-Resort east of Austin on Interstate 90 spent all Sunday night and the majority of Monday monitoring the Rose Creek as it rose out of its banks, then frantically moving campers and RVs away from the flood water. By Monday afternoon — after pulling an all-nighter — she was running on fumes, but was still sporting a positive attitude.

“I haven’t been to bed yet,” she said Monday afternoon. “But we need to help the campers first. … We don’t give up. We’re fighters.”

Beaver Trails, about seven miles east of Highway 218 on Interstate 90, was under water by early Monday morning after much of Mower County received 2.8 inches of rain or more over the weekend. Austin, however, received only 1.67 inches over the last three days. 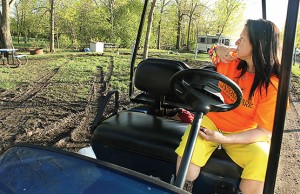 Tammy Westrich looks at damage to campsites at Jellystone Park Monday afternoon east of Austin. Many campers had to be pulled out of mud and debris after Rose Creek flooded the property. –Matt Peterson/Albert Lea Tribune

In October 2011, a fire leveled the main building of the Beaver Trails campground, but Westrich immediately vowed to rebuild, and they opened a new facility six months later.

Westrich says she’s not sure yet of the damage the flood caused, as she’s more focused on moving campers. No one was injured, she said.

People camping jumped in to help Sunday night and Monday morning, Westrich said, and many are still looking forward to Memorial Day weekend at the campground, which will go on as planned without a hitch.

“We always look to the positive,” she said. “Something good has to come out of that.”

Westrich estimates the flood is the worst the camp has seen in more than 13 years. She said the majority of RVs are OK, but some suffered water damage.

Corky Krebsbach, owner of Corky’s Corner Inc. at 308 W. Main St., said his business had next to no water damage after the Adams Fire Department and volunteers sand bagged much of downtown Sunday night. He said Wagner’s Foods was fine, and businesses next to him didn’t have damage, either.

He said one downtown business which didn’t sandbag had water six inches past the door, even though flood waters rose over the curbs and reached many store fronts Sunday evening.

“Most businesses had water up to the doorways, but most weren’t flooded,” Krebsbach said. But by Monday afternoon, the water had receded.

Some homes across town did suffer significant damage, however, including a couple of Krebsbach’s relatives’ properties. Amy Storlie, who works at Corky’s, said she had a “lake” in her yard.

Krebsbach said this is one of the worst floods Adams has seen in years.

“We had some pretty good floods over the years, and this ranks right up there,” he said.

According to the National Weather Service, as many as four roads are still closed near Adams due to flooding on the Little Cedar River and its tributaries.

The flood warning for Mower County expired at 10 a.m.