Funeral services for Kenneth R. Toft of Ellendale will be at 11 a.m. Wednesday at the First Lutheran Church in Ellendale. The Rev. Richard L. Sliper will officiate. Interment will be in First Lutheran Cemetery, Ellendale. Military honors will be accorded by the Ellendale veterans organization. Visitation will be Tuesday from 4 to 7 p.m. at Bonnerup Funeral Service, Albert Lea, and one hour before the service at the church. 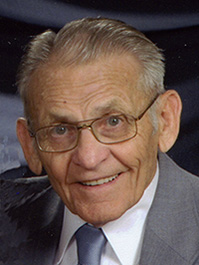 Kenneth died on Saturday, May 25, 2013, at Thorne Crest Retirement Community, Health Care Wing, in Albert Lea. He was 86.

He was born June 9, 1926, at Naeve Hospital in Albert Lea, the son of Irvin and Cora (Gunderson) Toft. He was baptized and confirmed at the First Lutheran Church in Ellendale, where he was a life-member. Kenneth graduated from Ellendale High School. When he was 17, Ken played baseball for the Owatonna Ace’s, a Class AA team, and continued to play on area teams until retiring his uniform when he was 33. He also had boxed in the Golden Gloves in Owatonna.

He proudly served our country in the U.S. Navy in Alaska, from 1944 until his honorable discharge in 1946.

In 1959, he bought a farm south of Beaver Lake, where he farmed until retirement. In addition, Ken had drove school bus for the Ellendale District for more than 33 years.

He was a member of the Veterans of Foreign Wars.

Ken’s most treasured times were those when he had all his family gathered.

Taft, Calif., and several brothers-in-law, sisters-in-law and nieces and nephews.

He was preceded in death by his parents, Irvin and Cora Toft, brothers Gordon, James and Paul Toft, and sisters Olive, Carol and Grace in infancy.

Special thanks to Dr. Vocal, Connie and Maryann and staff at Whispering Oaks, and the staff at Thorne Crest for their compassionate care for Kenneth and his family.

He will be greatly missed and fondly remembered.