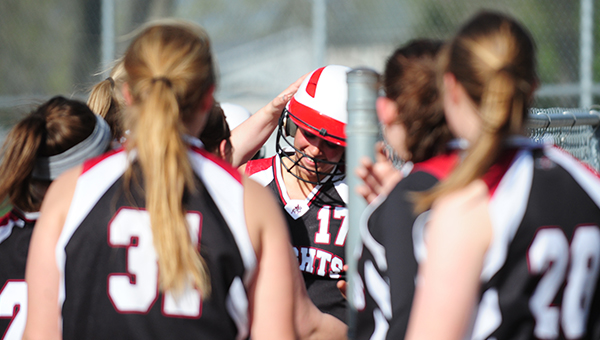 Alden-Conger’s Cassie Gilster is congratulated by her teammates after she hit an inside-the-park home run in the bottom of the sixth inning against Glenville-Emmons. She also scored in her fifth-inning at-bat on a triple with a fielding error. — Micah Bader/Albert Lea Tribune 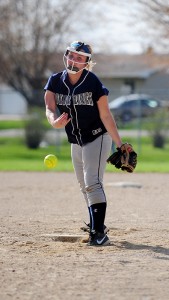 “We finally started putting people on base,” he said. “We’ve just got to do a better job at the plate and in the field.”

After a scoreless first inning, the Knights loaded the bases with two outs in the bottom of the second. However, Glenville-Emmons pitcher Bre Lundmark earned a strike out for the final out of the inning.

“She pitched herself out of a few jams,” Glenville-Emmons head coach Lisa Ziebell said.

The pitching dual continued into the fourth inning.

Alden-Conger’s Kasey Knutson scored the first run of the game during a fielder’s choice situation in the bottom of the fourth. Knutson was in scoring position after she hit a lead-off single and stole second and

Megan Knutson scored the Knights’ second run of the inning on a double by Madison Erickson. Glenville-Emmons’ senior Heather Davies caught a ball hit deep to center field for the final out of the inning.

In the bottom of the fifth, the Knights’ lead-off batter struck out, but Alden-Conger rebounded at the plate to score four runs before the inning was over.

Cassie Gilster started the fireworks by scoring on a triple with a fielding error. Allison Songstad followed with a line-drive two-RBI single down the first base line to give the Knights a 6-0 lead. 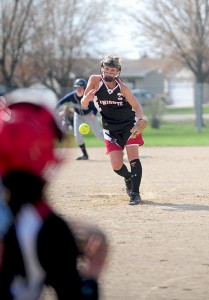 In the following inning, Gilster earned an in-the-park home run.

“Cassie picked us up big time with that home run and triple,” Nelson said.

Songstad earned the pitching win for Alden-Conger. She threw for seven innings, gave up three hits and struck out 12 batters.

“Ali did a great job pitching around us,” Ziebell said. “We need to come ready to hit.”

Both teams broke in inexperienced players.

Glenville-Emmons had a substitute for injured ace pitcher Madi Ziebell.

Alden-Conger played without seniors Ariel Keller and Karina Skov. The duo was in Arizona on a school-related science trip, Nelson said.

Last season, the Knights and Wolverines met on the softball field twice. Alden-Conger won both meetings. The first win was 11-0. In the second game, Glenville-Emmons forced extra innings and lost 2-1.

Alden-Conger improved to 7-3, while Glenville-Emmons fell to 4-6 overall.

Next, Alden-Conger hosts St. Clair and Glenville-Emmons plays at Mabel-Canton. Both games are at 4:30 p.m. today.