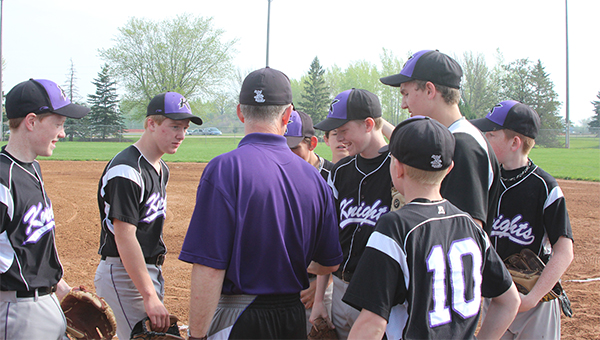 Albert Lea 13AAA head coach Kelly Bordewick instructs his players after time is called on the field. The 13AAA Knights earned third place in the Baseball Slugfest, which took place Friday through Sunday. — Kelly Bordewick/ For the Albert Lea Tribune

The Albert Lea Knights hosted their Baseball Slugfest, a three-day tournament with 25 teams across four divisions at Snyder Field.

The 12AAA Knights led the way by winning the championship in their five-team division.

The road to the championship was a win over Northfield, Burnsville and Hastings. The 12AAA Knights also lost to St. Francis in pool play, but received the top seed for the tournament. 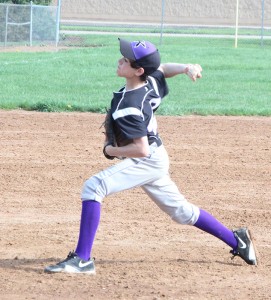 “We took first because of our seed,” Ball said.

Ball said his team has chemistry.

“These guys have been playing ball since they were 8, and we have practice twice a week,” he said.

With the win, the 12AAA team qualified for the Minnesota Baseball Tournament and Minnesota Sports Federation Tournament, Ball said.

Three other Albert Lea Knights baseball teams competed. The 13AAA team took third place out of seven teams, the 13A earned fourth place out of nine teams and the 14AA team was fourth out of four teams in a tough division.

Kelly Bordewick is the head coach of the 13AAA team and the director of the entire Knights baseball program.

He said the seventh annual Baseball Slugfest was a hit.

“It went really well,” Bordewick said. “We have a really good parent group who came out and helped with preparation. Lots of support from parents.”

His team had a successful tournament as well. Against New Ulm his team rallied after trailing by six runs to New Ulm to win in the first round of bracket play, he said.

Later this season, the Albert Lea Knights 10A, 10AAA, 11A and 11AAA teams will compete once again at Snyder Field for the Knights Baseball Classic June 21 to 23.