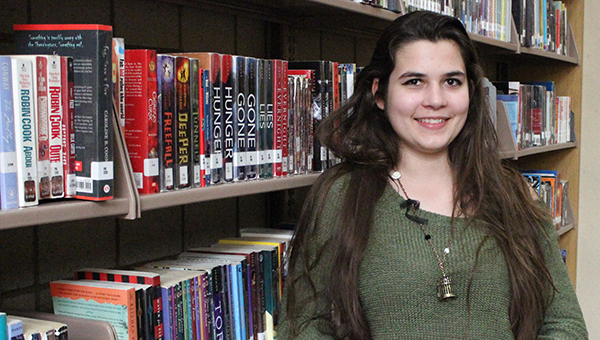 Foreign exchange student Joséphine Dufour poses for a photo at Albert Lea High School. Dufour’s year in the United States will end in July when she will return to France. –Kelli Lageson/Albert Lea Tribune

A Parisian-born city girl has been enjoying her time in Albert Lea.

Joséphine Dufour, 17, has been staying with three different families during her year as a foreign exchange student through Rotary International. Dufour said she wanted to go to either the United States, Australia or Spain. And she only chose Spain because there had to be one country where English wasn’t the main language.

“I really, really needed to speak English,” Dufour said. “I really sucked when I first got here, but I think I’m pretty good now.”

Her ultimate goal is to be an international business lawyer, and she knew that speaking English well will help her on that journey. She completed high school in France and plans to start applying to universities soon. She didn’t mind that her classmates will be going to a university without her, because she skipped a grade when she was younger.

Dufour has enjoyed staying with three families during the year and said it helped her learn how to adapt to different situations. The families were Sheila and John Schulz, Kim and Daniel Otten and Chuck and Denise Sandagar. Staying with different families brought lots of different experiences because some had young children at home, some had pets and the Ottens live near Hayward, which gave Dufour a chance to see what it’s like to live out in the country.

She also learned to be more responsible because she didn’t have her parents and family close by to help her. Dufour said she missed her family around Christmas a little, but talking with them on Skype helped. She told her grandparents that she missed European chocolate, and they sent her a care package.

Another thing she missed the most was public transportation and how easy it was to get to other places. Reims, the city she lives in, is a 45-minute train ride away from Paris. And even in Reims, she could walk or ride the train or bus anywhere she wanted.

“Here every thing is bigger,” Dufour said. “We don’t have big cars or SUVs because they’re not useful.”

Dufour enjoyed the types of classes she was able to choose at Albert Lea High School. She said her high school only has general classes like math and science, but while she was here she was excited to see classes in engineering, forensic science and care of small animals.

“Those kind of classes are not at the high schools in France,” Dufour said.

She also enjoyed being the manager for cross country and being on the mock trial team.

“I want to be a lawyer so it was interesting,” Dufour said.

She enjoyed learning more about the American court system and the extracurricular time. Her high school in France was from 8 a.m. to 4:30 or 5 p.m., and there were no school activities and no sports. Those interested in sports could be in club teams and play on the weekends. She liked that Albert Lea has the Tiger mascot for all its teams.

“It was really cool to see the school spirit,” Dufour said.

Through Rotary, she and other foreign exchange students from other countries who have been staying in America will tour other states in the U.S. before they leave in July. She said it has been a great experience that she thinks will help her throughout the rest of her life.

Address: Dufour is currently staying with Chuck and Denise Sandagar, but she’s from the French city Reims.

Family: Dufour’s parents are Valerie and Francois, and she has four sisters: Pauline, 21, Domitille, 15, Colombe, 12, and Marguerite, 7.

Interesting fact: Dufour wants to improve her English so she can be an international business lawyer someday.