Memorial services for LeVerne O. Miller will be at 2 p.m. June 2 at Bonnerup Funeral Home in Albert Lea with a visitation one hour prior to the service. The Rev. Shawn Stafford will officiate. 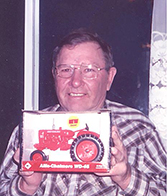 LeVerne was born on March 4, 1939, in Freeborn. The son of Serinus and Margaret (Hansen) Miller. He attended public school and was a Freeborn County resident all of his life. On March 3, 1973, he was united in marriage to Linda Knutson at the Bricelyn Lutheran Church.

LeVerne was a member of the Hartland Evangelical Lutheran Church. After marriage, he farmed before going to work for Farmstead Foods for more than 40 years. He was a member of the Eagles, enjoyed gardening, playing cards and casino trips. He loved his pet dogs, and family was very important to him, especially his grandkids. LeVerne was a hard worker and never complained.

He is preceded in death by his parents, Serinus and Margaret Miller.