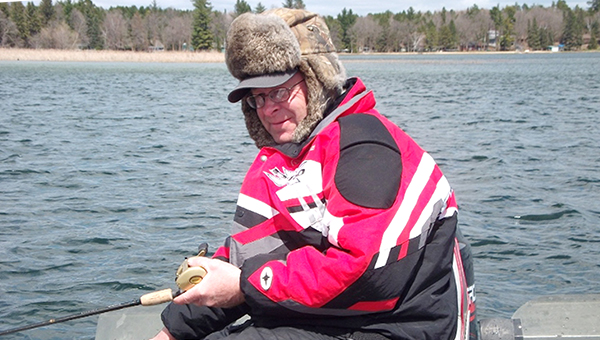 Another cold and windy fishing opener greeted most anglers this past weekend. I guess we should just assume that windy and cold will be the norm when venturing out on the fishing opener. On the other hand, finding open water to fish wasn’t quite as predictable.

The governor’s fishing opener actually started on Thursday in the Park Rapids area with many planned events, and it continued through the weekend. Some of the area’s lakes were open but most were at least partially ice-covered. Everything that I have ever been told, read or experienced was telling me that fishing would not be that good right after ice-out. With this in mind, I headed into the weekend not expecting much in the way of fish, but I was looking forward to learning about the Park Rapids area. 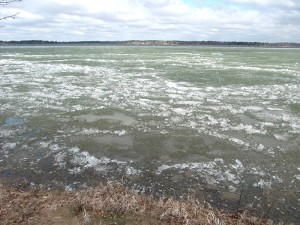 The ice was still on part of Fish Hook Lake late on the morning of May 11. — Dick Herfindahl/Albert Lea Tribune

While attending the community picnic on Friday night, I was impressed with the number of folks attending. They were expecting around 2,500 people in attendance, and I believe that there were easily that many. If you have ever been to Park Rapids, you know they have a very impressive downtown area. I always seem to get a good feeling when I see a community come together to take in the festivities and promote their area to the media. This wouldn’t be possible were it not for the 400 volunteers who put in a lot of work and time to make it all come together.

I was very impressed with the Park Rapids area and the friendly people who call it home. The theme for this year’s opener was “Catch a Memory,” and the folks in this area made sure that all the memories caught were good ones. I’ve said it many times before: it’s not about the catching of fish but about the experience of being there.

My friend Jeff Anderson of Watertown, S.D., who I have been fishing with for many years, were fortunate enough to be hosted by Brett Kent who is an avid outdoorsman in every sense of the imagination. On Friday evening, Jeff and I were sitting outside of the Park Rapids Armory waiting to go in and meet our fishing host, when a nice couple passed us and said hello. A little later, we discovered that these nice folks were Brett and Brenda Kent, and Brett would be the one taking us fishing in the morning.

The next morning we met Brett for breakfast, and he took us to a lake that he knew was open and had produced walleye for him in the past. It was a cold, windy and fishless venture, but fun nonetheless. Brett suggested we get off the lake to warm up and seek out another lake to fish. While we were approaching the access, two young guys were heading out into the cold and wind in a paddle boat. Brett turned to us and said, “Now those guys are tough to be fishing from a paddle boat, I mean really tough.”

It didn’t take me long to figure out that Brett was a full-blown outdoorsman, and there weren’t many things that he didn’t like doing when it came to hunting and fishing. Brett and Brenda have a honey business appropriately called “Double B Honey,” and they have 50 hives that produce about 4,500 pounds of honey each year. He also traps minnows and leeches for local bait shops. Bait is not the only thing that he traps because he had an impressive collection of hides that he had from the past winter including bobcat, timber wolf, fisher, coyote and gray fox.

Brett has a nice northern hanging on the wall, and after spending a short time with him, I knew it would come with a story. It seems that he and some friends went to Lake of the Woods to ice fish, and he was pulling a fish house across the lake when it lost its runners. He was so determined to get to the spot, which was five miles out, that he pulled the house bouncing along the ice until he got to the spot. Brett had put a tip-up out and later looked out and noticed that there was a fish on it. He went out and began bringing this huge northern in, but it was almost too big for the hole. So, he called to the guys in the house to help him, but they said, “It’s too cold, you’re on your own.” After several attempts, he managed to get the fish through the hole. Unfortunately, the fish bit him on the hand, and he had a huge gash that was bleeding. Even that didn’t bring the friends out of the house to help. Another tale that he told was about the time his friend asked him to go trout fishing, which Brett says is not his favorite pastime. While fishing and catching nothing, he noticed two beavers nearby. He ended up setting two traps and caught both beavers, which I suspect made his trout-fishing trip a success. Brett also enters about four fishing tournaments during the summer with his son, which Brett says is quality time that he enjoys spending with him.

Over the years, I have fished with a lot of folks, but I have to say that there have been none better than Brett. He is truly an avid outdoorsman and can tell a story like no one I have ever met. Oh, did I mention that his day job is that of a Minnesota state trooper, which he has been doing for the past 27 years.

Brett said he was originally from the Twin Cities area, but he knew from an early age that he wanted to live in the Park Rapids area. He told me that his wife, Brenda, once mentioned going on vacation, and his response was quite simple: “People wait all winter to come here for vacation. Why would we want to go anywhere else?” I don’t believe that you could possibly have a better testimonial than that for the Park Rapids area.

I managed to catch a 21-inch walleye while fishing the open part of Fish Hook Lake in the afternoon. We had checked out the access that morning, and the ice was on both sides, but the access was open. We were the only boat out there for quite some time that afternoon, and we managed only that one fish. It was a great experience, not only meeting Brett and Brenda, but learning about this great area of the state, which I know that I will be revisiting in the not-so-distant future.

Until next time, take some time to go out and enjoy some fishing on one of our many beautiful lakes.

Please remember to keep our troops in your thoughts and prayers, because they are the reason we are able to enjoy all the freedoms that we have today.