Marvel Steinhauer of Walters, died Friday, May 24, 2013, at The Shepherd’s Inn, where she had been a resident since September of 2012. Memorial services will be Thursday at 10:30 a.m. at United Lutheran Church in Walters. The Rev. Don Rose will officiate and the interment will be in the Walters Cemetery. Bruss-Heitner Funeral Home in Wells is in charge of arrangements. 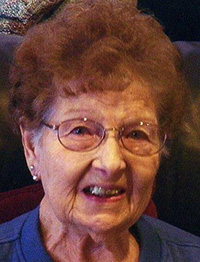 Marvel was born Aug. 28, 1920, in Albert Lea, to Alex and Esther (Mickelson) Somage. She was raised in Albert Lea and completed her eighth year of school; she was baptized and confirmed in 1937 at Faith Lutheran Church, Walters. She worked for the Don Steinhauer family as a house helper. She married Willard E. Steinhauer on May 23, 1937, in Walters. She worked hard as a farm housewife and mother of four on the Steinhauer farm in rural Bricelyn. Willard and Marvel enjoyed dancing in their early years. Her hobbies were gardening, bird watching, growing beautiful flowers and taking care of her beloved cats and dogs through the years. She was an avid reader. She was also a member of WELCA and United Lutheran Church in Walters. Marvel enjoyed watching TV and never wanted to miss a Twins or Vikings game.