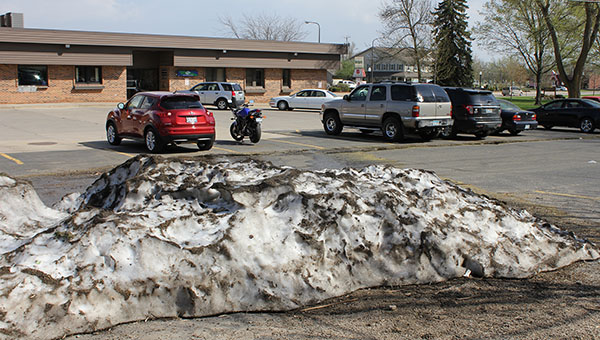 In a show of contrasts, a snowbank in the parking lot of Security Bank Minnesota in Albert Lea melts in 100-degree heat Tuesday afternoon. The snow was a reminder of a foot of snow that fell in the city 10 days prior. — Tim Engstrom/Albert Lea Tribune

Albert Lea hit a high temperature of 102 degrees Tuesday. It is the earliest date that the city has ever recorded a 100-degree air temperature.

The forecast high today was in the 90s, not the 100s. But the air temperature in Albert Lea crossed the threshold at 3:13 p.m., according to the automated weather station at the city airport. It lasted until about 5 p.m. It peaked at 102 degrees at 4:13 p.m.

The National Weather Services has issued a red flag warning for much of the states of Iowa, Minnesota, Nebraska and the Dakotas. The warning indicates dangerous fire conditions.

The Freeborn County Sheriff’s Office has suspended all open burning for Tuesday due to strong winds, high temperatures and dry conditions expected throughout the day, according to a news release.

Weather conditions with cooler temperatures and lighter winds are expected to return to the area today. If conditions moderate as expected, open burning will resume. The suspension does not include a restriction on recreational fires.

The overnight low was 57 degrees, at about 5:30 a.m. That represents a temperature swing of 45 degrees in less than 13 hours.

It’s not uncommon in Minnesota during spring and fall, either.

“Spring and fall is when we see the wild temperature swings,” he said.

It often comes with cold air to the north and warm air pushing from the south or the west, trying to fill in.

“It’s why spring is so windy and stormy,” Frederick said.

On Tuesday, west winds delivered warm, dry air. The dew point was 27 degrees, when it usually is in the 40s and 50s. Frederick said the relative humidity was 6 percent.

Warm, dry air replacing cold, dry air doesn’t have the same risks that warm, moist air possesses. Humidity is a hallmark of Minnesota summers. It is largely because of acres and acres of cropland but also because moisture from the Gulf of Mexico at times pushes northward across the central United States, Frederick said. When the warm, moist air replaces cold, dry air, tornadoes and severe thunderstorms become possible.

Austin recorded a high of 99 degrees, setting its all-time maximum temperature for the month of May. The previous had been 94, set in 1988.

High temps this month in Albert Lea, in degrees Fahrenheit: