Tylor T. Nelson of Glenville graduated with honors on May 3 from the Marine Corps recruiting depot at San Diego, Calif. He was meritoriously promoted to Private First Class and was also named the Iron Man, most physically fit, of the India Co. of 317 men. The brigadier general recognized Nelson’s accomplishments during the graduation ceremony. 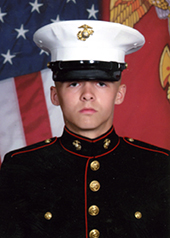 After boot leave Nelson will return to Camp Pendleton, Calif., for advanced training before receiving his active duty orders.

He is the son of Laurie and Terry Nelson and the grandson of Lowell and Marcella Nelson, all of Glenville, and Arnie and Mary Ann Venem of Albert Lea. He is also the great-grandson of Harriet Heckes of Albert Lea.