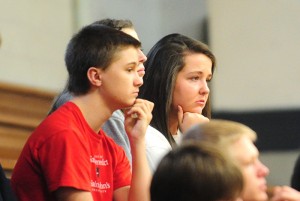 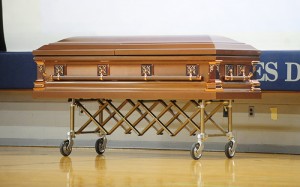 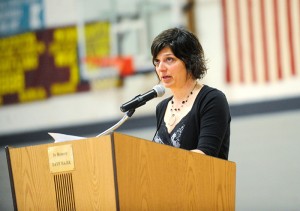 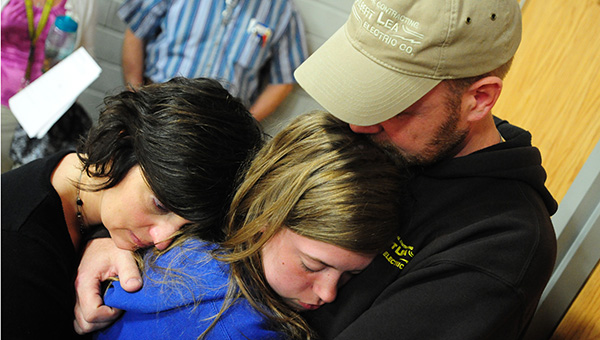 Glenville-Emmons High School students learned the importance of safe driving Wednesday during what was an emotional assembly that depicted the death of one of their own classmates to distracted driving.

Teachers had initially planned a mock crash, where the students could watch as Mayo One, ambulance crews and other first responders came to the scene of a fake crash that resulted in the death of a student, said Mike Hockert, one of the drivers education teachers for the school.

Students in 10th-, 11th, and 12th-grades at Glenville-Emmons High School listen to Misty Nelsen talk about the life of her daughter, Meagan Nelsen, who was the victim in a mock crash. — Brandi Hagen/Albert Lea Tribune

But because of weather forecasts for Wednesday, organizers decided to go with a scaled-down version of the incident.

They made a video of 18-year-old student Meagan Nelsen, who was riding in a car with senior Derek Olson. Olson could be seen texting while he was driving, and then a few seconds later the car crashed. Nelsen was not wearing her seat belt.

Students could hear a 911 call being made and then see a casket being pulled to a hearse.

Photos of Nelsen flashed up on the screen, and then Nelsen’s mother, Misty, spoke to the students about what it would be like if her daughter died in a crash.

“I would give anything to have my daughter back, but that is not how the world works,” she said.

A casket, loaned by Bonnerup Funeral Service, sat in the background.

Misty Nelsen talks about her daughter, the victim in a mock crash, to members of the Glenville-Emmons student body Wednesday.

“I hope I never have to give a speech like that, ever,” she said after the assembly. “Losing a child is a parent’s worst nightmare.”

She shared information about her daughter, who is a member of the National Honor Society, on the student council and on three sports teams.

“I hope it does make a difference,” Misty said. “Thinking about the fact that this could actually happen to your child is a tough pill to swallow.”

She encouraged the students to wear their seat belts, to not speed, to not drink and drive and to not text while driving.

“Don’t force your loved ones and families and friends to go through what we’re going through today,” she said.

Olson, who was the cause of the crash in the video, said making the video was a good lesson for him and he hoped it would be for others as well. He noted he felt some of the guilt and pressure that would have come if the crash were a real one.

Meagan Nelsen, who was out of the gym in the library during most of the assembly, said the experience was also eye-opening for her.

A coffin sits in the Glenville-Emmons gym Wednesday during a mock crash presentation. The presentation comes just three days before prom to remind students to use caution when driving.

She said it was difficult to see her mother and her father, Kevin, be upset.

Hockert said teachers have put on the assembly a few years in the past after seeing real crashes that have injured or killed their students. They hope to prevent that from happening again.

“We have lost students,” Hockert said.

Sixty-seven percent of all fatal crashes occur in rural areas.