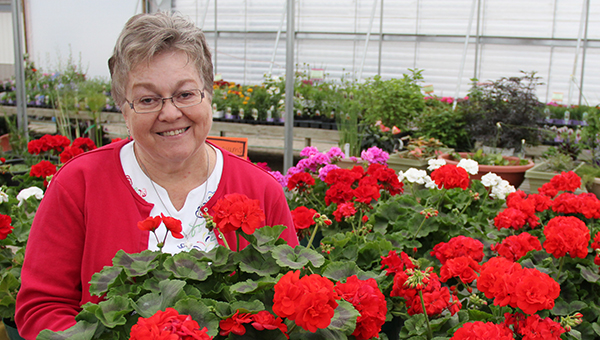 A group of Albert Leans are hoping residents and businesses plant geraniums to beautify the city.

A second goal of the group is to get everyone in Albert Lea to plant the city’s official flower — red geraniums — so that the city pops with color.

“Whether they bought them from us or not, we just want flowers around town,” Hintermeister said.

More than 1,500 plants were sold to residents of Albert Lea and surrounding communities. Their biggest client was Mayo Clinic Health System in Albert Lea, but other businesses also bought flowers. The sale was organized by Hintermeister along with other committee members Jane Loge, Kelly Schultz, Ginny Thompson and Sally Skrlin. A total of 46 chapter members either gave donations or helped with the sale.

“Our purpose is to earn as much money for scholarship as we can, but we do also get cash donations,” Hintermeister said.

Though red geraniums can be found at any greenhouse, Hintermeister said the group ordered theirs through Hilltop Greenhouse & Farm, located two miles north of Hollandale.

And the group doesn’t mind if you don’t want to plant geraniums. Hintermeister said even if Albert Leans plant petunias, impatiens or any colorful flower, the group will be happy to see beautiful flowers around town.