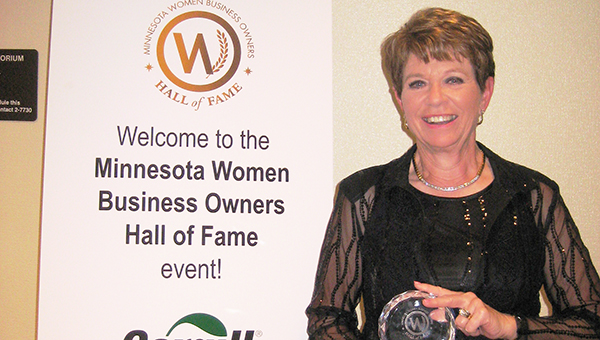 Geraldine Vogt, better known as Mrs. Gerry, holds her glass award on April 25 in Wayzata after being inducted into the Minnesota Women Business Owners Hall of Fame. –Submitted

Mrs. Gerry has been inducted into the Minnesota Women Business Owners Hall of Fame.

Geraldine Vogt and 24 other women entered the honored hall in a ceremony April 25 at the Cargill headquarters in Wayzata.

Vogt is the Mrs. Gerry in the Albert Lea-based company Mrs. Gerry’s Kitchen. It produces 27 million pounds of food in a 122,000-square-foot plant on Y.H. Hanson Avenue, just across the street to the east of Albert Lea High School. The company, which is owned by Vogt and her husband, Jerry, employs 175 workers and distributes to 17 states, with revenues of more than $40 million.

“Gerry was a stay-at-home mom who took a simple family recipe for potato salad,” reads her profile in the Minnesota Women Business Owners Hall of Fame booklet for the 2013 inductees, “and founded Mrs. Gerry’s Kitchen in Albert Lea when her husband needed salads on his Schweigert truck to sell to stores on his meat route.”

“Gerry knew she was ready to expand, but there were very few women working in manufacturing in the 1970s,” the booklet states.

Her company grew from making three products to making 119 products under the Mrs. Gerry’s label. It also makes 31 private-label products. Some of the company’s clients are SuperValu, Nash Finch and Sysco.

Vogt said she is happy to be honored and said she admired her fellow 2013 inductees.

Vogt has received accolades through the years. Some were listed in the ceremony booklet:

• In 1988, she became the first woman to chair the board of directors for the Albert Lea-Freeborn County Chamber of Commerce.

• She served as chairwoman for the board with Riverland Community College and the United Way of Freeborn County.

• She was on the Minnesota Advisory Council of the U.S. Small Business Administration.

• She was on the board of directors for Naeve Hospital and for First Bank-Albert Lea.

• In 1988, she received what was called a Special Recognition Award from the U.S. Small Business Administration.

• She was a finalist in the 1992 Entrepreneur of the Year competition sponsored by Ernst & Young Inc. magazine and Merrill Lynch.

• In 2011, Mrs. Gerry’s Kitchen was a finalist at the Minnesota Family Business Awards hosted by Twin Cities Business Magazine.