Oklahoma residents pick up the pieces

When Albert Lean Karen O’Byrne heard news that a massive tornado swept through Moore, Okla., on Monday, her thoughts immediately turned to her brother. 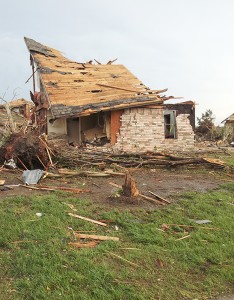 Albert Lea High School graduate Bob Boyer took this photo of his daughter Amy’s home on Monday that was destroyed by a massive tornado that struck Moore, Okla. –Submitted

Bob Boyer, a 1963 Albert Lea High School graduate, lives in the Oklahoma City suburb where a tornado devastated hundreds and killed at least 24, according to latest reports.

Bob has lived in Oklahoma for 25 years with his wife, Sarah. Their children Drew and Amy, and their families, also live there, while another son lives in Norman, Okla.

After multiple failed attempts to reach Bob by phone, O’Byrne said she took to Facebook to seek answers.

“I was desperate, I didn’t know who to call,” O’Byrne said. “I wrote, ‘Please let us know if everybody’s OK.’”

She received a response back from Drew’s wife, Lindsy, who told her that everyone was safe. Bob was in an underground storm shelter with two of his grandchildren and Lindsy when the tornado came through the area. While listening to the radio from the shelter, they heard that Amy’s home was in an area that had been directly hit.

Amy was at work at the time.

Unable to get to the area by car, Bob and Drew walked five miles to check on Amy’s home. They found it demolished.

“It had been hit really bad,” O’Byrne said. 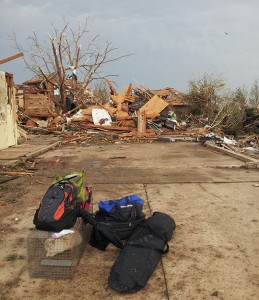 A rescued cat sits in a crate near the destroyed home of Amy Boyer and her boyfriend, John Salazar, in this photo taken by Albert Lea High School graduate Bob Boyer in Moore, Okla., on Monday.

She said they found Amy’s cat but didn’t immediately find the dog of her boyfriend, John Salazar, until Tuesday morning. The dog had been underneath the rubble but was not making a sound when he was found.

Bob told her he has since had to travel eight miles away from Amy’s home to find a restaurant to eat at that had electricity. He is waiting for his own electricity and water to return and has been charging his phone in his car.

O’Byrne said this was not the first time for the family to endure a tornado.

In 1999, Amy lost her high school, Westmore High School, to one. The school ultimately had graduation at the community college auditorium.

“Their family has been through it, but this is the first time that one of their homes has been taken,” she said.

O’Byrne has three other brothers, Mike, Kevin and Scott, who also reside in Albert Lea.