On course for a championship 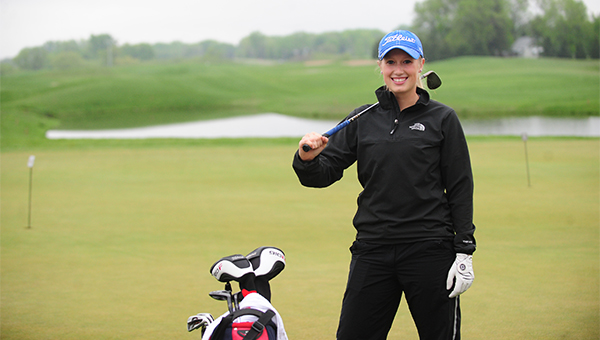 Megan Pulley, a senior from Albert Lea, stands on the green Tuesday at Wedgewood Cove Golf and Country Club. Pulley has been a leader for the Albert Lea girls’ golf team. She was the medalist at the Tigers’ first six meets, and she won the Big Nine Conference scoring title. — Micah Bader/Albert Lea Tribune

Years of training on the golf course is paying off for Albert Lea’s Megan Pulley.

Pulley, a senior on the Albert Lea girls’ golf team, began swinging a club at the age of four.

“My grandparents — Dave and Elaine Syverson — really got me started,” Pulley said. “They started me with plastic clubs and we went from there.”

These days, she’s upgraded to professional clubs, and so far this season, she’s been destroying her opponents. Pulley won the Big Nine Conference scoring title with an average of 78.4.

In the first meet of the season, a triangular with Austin and Rochester Century, Pulley completed the course in 79 strokes, a new Big Nine personal best. She was also the meet’s medalist, an honor that goes to the golfer who completes the course with the fewest strokes.

Through Albert Lea’s first six meets, Pulley showed dominance and consistency. She was the medalist at each of those meets guiding the Tigers to a 6-1 Big Nine record. During that six-meet run, Pulley shot a career-best 74 at Wedgewood Cove Golf and Country Club. Her score helped Albert Lea beat Owatonna by two strokes.

At the conference meet, Albert Lea took sixth place and fell to 10-8 overall. For the first time all season, Pulley took second.

Albert Lea head coach Shawn Riebe helps Pulley with mechanics, but he is also teaching her what she called the most important part of the game.

“He really helps with my mental game,” Pulley said. “He’s really helped me get past if I have a bad hole — that I can still shoot in the ‘70s.”

Character is shown in wins and losses, and that’s something Pulley admires about one of her role models, Rory McIlroy.

“He always shows a great attitude on the course,” she said. “In interviews sometimes he’ll say, ‘Today just wasn’t my day. Hopefully I can go out there an play better tomorrow.’

“It’s an inspiration to me if I have a bad round.”

Tiger woods is also one of Pulley’s favorite golfers, but for different reasons.

“I’ve always loved Tiger,” she said. “He has had some bad times, but I think his swing is amazing.”

Pulley’s swing is one of her strengths as well, she said. Now, she’s been occupied with improving her short game.

“I’ve been working on chipping and putting the most,” Pulley said. “I’ve really wanted to get that down, because my ball striking has been just fine. I just really want to nail that and have everything come together.”

The Albert Lea girls’ golf team hosts most of its meets at Wedgewood Cove. Pulley has some happy memories of the course: her first hole-in-one.

On the 14th hole, as a freshman in high school, Pulley drew her five iron and stood back at the men’s tees.

“I hit it and never thought anything of it,” she said. “I actually never saw it go in — but my friends did.

“They were freaking out and running. So, that was a really cool experience.”

Pulley said she plans to major in business administration with a concentration in international business, while she competes in golf at Wagner College, a Division I school in Staten Island, N.Y.

The Tigers compete next at the Section 1AAA meet at Cannon Golf Club May 30.

“We’re getting ready and making sure everything is in tune,” Pulley said.

Riebe said Pulley’s work ethic is second to none.

“Megan has easily been the hardest-working players I’ve had the privilege of coaching,” he said. “She has always looked, acted like and carried herself like a golfer.”