The St. John’s Auxiliary met at 2 p.m. May 20 in St. John’s chapel. Vice President Jan Jerdee welcomed everyone. Devotions were given by the Rev. David Hernes. Becky Nordland led the group on the piano in singing “Morning Has Broken” and “Blessed Assurance.”

Volunteer Coordinator Carla Reichel reported 973 hours for April, day care had 40 hours, two You & Me clubs, one sing-along and also four visits around St. John’s. Reichel also reported on activities for the residents for June as follows: LA Sasse music on June 4, Richie Z music on June 7, on June 14 for Father’s Day will be an antique tractor show with an outside picnic weather permitting, Debbie Nordland music on June 20, Gary Froiland music on June 21 and Kent Larson music on June 28. There will also be gardening and outside projects.

Jerdee read the names of residents celebrating May birthdays. Everyone sang “Happy Birthday.”

The program was provided by First Lutheran Church of Albert Lea with Rachael Christensen on the harp.

The meeting was closed with the Lord’s Prayer. 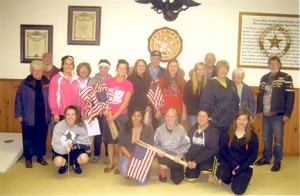 WFLA Lodge No. 44 members joined hands with the Glenville-Emmons softball team to place flags on veteran’s graves in Lunder, Round Prairie, North Round Prairie and Glenville First Lutheran cemeteries. -Submitted

The group met at the Glenville Legion, divided into four groups of students and lodge members and went to Lunder, Round Prairie, North Round Prairie and Glenville First Lutheran cemeteries with the flags. There were 19 participants in the project, 11 students, coach Lisa Ziebell and eight lodge members. The young people worked fast and the event went great.