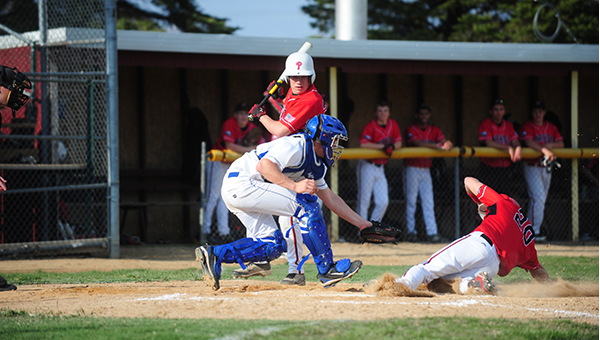 The New Richland-Hartland-Ellendale-Geneva dugout watches Dillon Parpart steal home plate in the bottom of the third inning Tuesday during the Panthers’ 8-4 win over Randolph. Parpart was safe. He scored NRHEG’s only run in the inning after he was walked. He stole the remaining three bases to score.— Micah Bader/Albert Lea Tribune

The Panthers never trailed. With the game tied at one in the bottom of the third inning, Dillon Parpart gave NRHEG the momentum.

Parpart was the lead-off batter in the inning, and he received a base on balls. He stole second. He stole third. Parpart capped his infield heist by beating the throw to home. His steal gave the Panthers a 2-1 lead and the momentum.

“That’s the second time we’ve stolen home this year. The pitchers haven’t really had a chance to get out there,” Reese said. “They sure didn’t help him (the pitcher) either. When Dillon took off, nobody said anything. He got a great jump on it.”

In the bottom of the fourth, NRHEG reeled off four runs to stretch its lead to 5. Trevor Tracy and Dillon Kubiatowicz scored on a triple by Nic Mangskau. Parpart and Johnny White also earned RBIs in the inning.

From there, the Panthers maintained their lead with Parpart on the mound.

“Our pitching was pretty solid,” Reese said. “He’s throwing strikes, and that’s what we want.”

NRHEG was coming off a 12-6 win over Medford. The Panthers are 3-4 on the season. Their other win is a 1-point victory over Blooming Prairie.