When we hear of an old ghost town, a forgotten town or a lost town, we generally think of the old Wild West — with the towns probably being located in a remote and now unoccupied region in the Arizona desert. 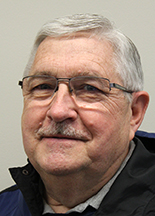 Well, we don’t have to look far as there is one located — so to speak — in our backyard. The town or “hamlet” as it was called back in the pioneer days is Banks, which existed from about 1862 to 1926 long before the neighboring towns of Frost, Bricelyn, Kiester and Walters.

As it has been a few generations since the two hamlets faded away, there was little historical information available from the local residents living close to the two former locations. Most of the people I talked to in doing this research had only a slight recollection of the hamlet and only heard about Banks from their parents or older relatives. So most of all the historical information I gathered on Banks was from the Minnesota Historical Society, the Faribault County Historical Society and the Faribault County panorama book covering the years of 1855 to 1979. As a sidenote from the research on Banks, I found that Faribault County and all of its townships have remarkable pioneer histories. But we will stick to the history of Banks for now. So let’s rewind to the middle of the 1800s. 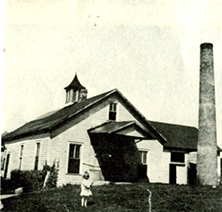 The creamery at Banks, a hamlet near Rice Lake. The child is Angela Esse, the daughter of the buttermaker at the time. Picture taken in 1917. –Submitted

We will have to first slightly review the history of Foster Township, established in 1855, and named after Reuben R. Foster, one of the earliest settlers in the area. The township is six miles by six miles, equaling 36 square miles. History shows that Abraham Akerman and J.O. Jones were the first settlers in Foster Township. Akerman was for many years one of the most prominent and enterprising men in Foster Township. He became the owner of much land and made valuable improvements to the township. He also served as township supervisor for a period of time.

According to A.J. Kiester’s history of Faribault County and Foster Township: “Akerman said that their principal occupation during the summer was killing mosquitoes and muskrats.” He died in 1882. The early (unofficial) headquarters of Foster Township was next to the northwest corner of Rice Lake where the hamlet of Banks was located. Early records show that the hamlet of Banks at one time was also called Rice Lake and Paynsburg after William Payne, the landlord of the hotel at that location.

Banks was given as the hamlet’s official name when the post office was established there in 1862. The first postmaster was Luther Biggs. A hotel, general store and the post office were all under one roof. Also, a blacksmith shop, church, bank, several dwellings and a school were eventually located at the hamlet’s location. The school was in the early school district 25 built in 1863 as a log building and was eventually combined with the Kiester-Walters school district in Kiester Township. The school was then sold and moved away. Also, many of the early pioneers of Foster Township and the hamlet of Banks are buried in the nearby Rice Lake cemetery.

Banks was an early busy stopover in the middle 1800s to the early 1900s for a stage coach line covering Blue Earth, Fairmont and Albert Lea. The stages were drawn by four horses and stopped over at the hamlet for the night with the hotel doing a lively business. The hotel had nightly dances on the second floor for the stage coach guests. The hotel was reported to have been eventually demolished in the early 1960s after being unoccupied for many years.

History shows that Banks may have been a larger hamlet if the building of the Milwaukee Railroad had followed the stage coach line. However, C.W. Thompson, a pioneer developer of Wells, persuaded the railroad to go through Wells in 1870 thus prohibiting any future growth of Banks and foretold the eventual end of the small hamlet.

Today only a modern farmhouse and the church, which was originally the Rice Lake Evangelical Church (established around 1861), remain on the northwest hamlet’s location. The second location of Banks was located on the southeast end of Rice Lake when a dairy creamery was built following the organization of the Foster Cooperative Dairy Association (1874-1926).

Also at this location, a general store was soon built close to the creamery. For some reason the post office originally located at the northwest location of Banks was later moved to the southeast location. However, the post office was eventually closed in 1904 and the mail then went to the Wells post office. The 1911 owner of the general store (F.W. Coats) eventually moved his store merchandise to the Matawan store. Between 1911 and 1925 the store operated part time but had been empty for several years when E.G. Bufkin of Kiester leased the building and stocked the store with staple goods. In 1926 the creamery developed financial problems and was closed that year. The store then soon closed due to lost creamery patronage and the stock was transferred to a store in Kiester.

Banks was not the only hamlet, town, settlement or named location in Faribault County that has vanished over the late 1800s and early 1900s. A few locations may still have a few buildings standing or a small cemetery but have lost their identity by no longer having a name. History shows that at least 62 ghost or lost towns like Banks in Faribault County disappeared because of competition from other hamlets, railroads bypassing the hamlet or post offices closing. Some of these 62 ghost towns are listed as Wesner’s Grove in Barber Township, Clayton-Homedale-Seeley in Seely Township, Cornet in Winnebago Township, Alton in Brush Creek Township, Lura in Lura Township and Oliphant’s Grove and Sheridan in Kiester Township.

Sheridan was located midway between Kiester and Bricelyn. The settlement had a school and smithy. When the Iowa, Minnesota and Northwestern railroad bypassed Sheridan by one mile, the village died. Sheridan’s post office opened July 11, 1894, and closed less than six years later on April 30, 1900.

The “Heritage of Faribault County” book states “Time shows that ghost towns are prime examples of how visionary pioneers not only misjudged where they thought commerce was going to thrive, but indicated how easily people changed their minds such as in the roller coaster way some settlements were named again and again. There were even two hamlets named Grant, for example.

Jerome Meyer is an Albert Lea resident who enjoys history.