Riverland graduate looks to the future

AUSTIN — Karem Salas Ramirez stopped by Riverland Community College Thursday to return her textbooks. It was a subtle sign she was graduating and moving on to the next chapter of her life.

A more obvious indication, however, will come tonight, when she steps up to the podium at Knowlton Auditorium in front of 250 of her peers plus their friends and family to speak about what it means to her. Riverland’s graduation ceremony will take place at 7:30 p.m. at Austin High School.

“I’m going to miss Riverland a lot,” she said. “This is a chapter in my life I’m not going to forget.”

Ramirez, who is graduating with her associate of arts degree, finished classes Tuesday. She used the downtime before graduation tonight to return books and take care of other last-minute chores. She constantly greeted passers-by in the hallway.

For Ramirez, her two years at Riverland have been a montage of many clubs, activities and volunteer efforts, all wrapped around her studies. When she first stepped foot on Riverland’s campus, she recognized almost no one there. International student adviser Miguel Garate was a family friend, and Ramirez had met multicultural coordinator Yesenia Mendoza not long before enrolling.

“Those were the only people that I knew,” she said.

That didn’t last long. Ramirez became a student ambassador with Riverland early on, and met plenty of administrators, staff and other students as a result. She later tried out nearly all of the school’s clubs, and stuck with the ones that fit her best. Soon there were friends everywhere.

“I always had someone to talk to,” she said.

Ramirez, who was born in Morelos, Mexico, and moved to Austin when she was 8 years old, has been on Riverland’s dean list and is a member of Phi Theta Kappa honor society. Over the past two years, she has served as treasurer for the Austin Student Senate, been involved with the local chapter of the American Association of University Women and tried her hand at countless other activities. She has also clocked more than 60 hours of community service.

Last summer, Ramirez was a tutor in Be Your Best, Riverland’s prep program for students entering college for the first time. The program included free courses, at the end of which a graduation was held. Mendoza asked Ramirez to speak at it.

Jan Waller, dean for liberal arts and sciences, watched Ramirez speak, and later approached her about speaking at Riverland’s graduation ceremony in the spring.

When the application for the speaker was released, Waller sent Ramirez a copy. She wasn’t the only one.

“I had like five people send me the email to apply for it,” she said.

Ramirez was a bit nervous, but eventually decided to go for it. After interviews, a letter of recommendation and providing a copy of her speech, she was approved as a speaker. She will address the graduates along with Joann Ramaker, an administrative support program graduate. 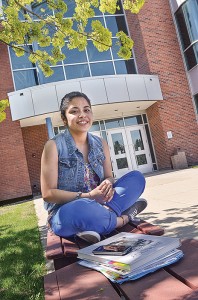 The graduation ceremony won’t quite mean an end to Ramirez’s involvement with Riverland altogether. She plans to continue to help out with student registration and other events periodically in the coming months. Other summer highlights include working at Walgreens and a road trip with her older sister to California in July.

Then, in the fall, Ramirez starts at the University of Minnesota-Twin Cities, where she plans to major in marketing and international relations. Though she’s a little intimidated by the size of the student body, she said she’s excited about the opportunity.

“It’s going to be an adjustment, but I’m looking forward to it,” she said.

This time, she has a few more friends and former Austin High School classmates to look forward to seeing, so she won’t have to start anew like when she arrived at Riverland.