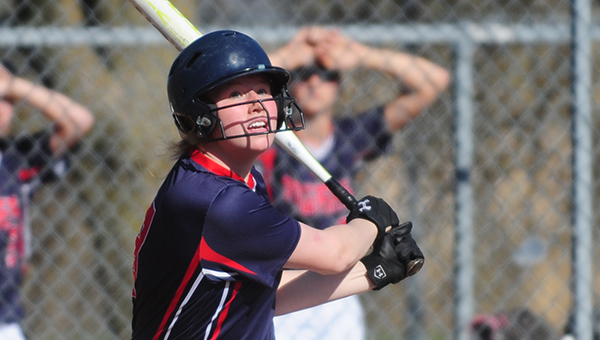 Taylor Thompson of Albert Lea watches a hit fly foul Friday against Rochester Mayo. Thompson was three for three at the plate, including an RBI double in the third inning. — Micah Bader/Albert Lea Tribune

The Tigers fell 9-3 at home to Rochester Mayo, a Big Nine Conference foe, on Friday.

“We just didn’t take advantage of situations where we could have scored runs,” Albert Lea head coach Dan Harms said. 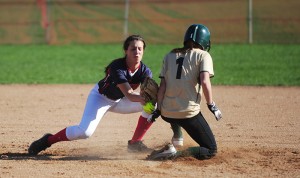 Megan Kortan of Albert Lea attempts to pick off a Rochester Mayo base runner who tries to steal second base. — Micah Bader/Albert Lea Tribune

After a scoreless first inning, Rochester Mayo took a one-run lead in the top of the second with a two-out RBI single. The Tigers were able to get out of the inning when shortstop Megan Kortan fielded a grounder and made the throw to first.

In the top of the third with two outs, the Spartans caught fire. Three straight hits gave Rochester Mayo a 5-0 lead.

However, the Tigers fought back in the bottom of the third and cut their deficit to two runs. Caycee Gilbertson earned a lead-off walk. Then, three straight hits — doubles by Taylor Thompson and Dominique Villarreal and a single by Lynzee Underdahl — drove in three runs.

In the bottom of the fifth, Albert Lea was poised to take control. The Tigers trailed 5-3 with the bases loaded, but the runners were stranded.

In the top of the sixth, the Spartans took the momentum and scored four runs.

Albert Lea was led at the plate by Thompson. She was three for three with a double, an RBI and a run scored.

The Tigers showed improvement on defense. Kortan fielded a line-drive at shortstop, tagged a runner and made the throw to first base for a double play.

“That was excellent,” Harms said. “We did some things well.”

Next, Albert Lea will host Mankato East at 3 p.m. Monday.