AUSTIN — Nearly 100 members and guests gathered at St. Olaf Church Thursday to learn a little more about technology and health and to hear about some of the most significant issues from an area leader.

For the third year, St. Olaf Lutheran Church in Austin held it’s continuing education day, with classes for the newest tech gadgets, getting fit after 50, a presentation on Lutherans in Alaska and a speech by Rochester Mayor Ardell Brede. 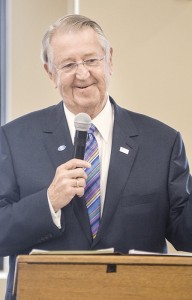 Brede spoke about growing up in Austin, keeping an open mind about the future and the current issues of diversity and the Destination Medical Center in Rochester.

Brede, a 1959 Austin High School graduate and former member of St. John’s Lutheran Church, has noticed huge changes in Austin and Rochester over the years.

“When I was in school, I knew was about one black family,” Brede said, who added Rochester schools now have students who speak nearly 60 different languages.

Over the years, Brede said he’s interviewed more than a thousand people, those of different races, gender and sexuality who all contribute to the city’s function. He has seen Rochester grow by 21,000 people in the last 10 years, and with a new Destination Medical Center, he thinks the growth rate would be even faster as proponents of the project say it could add 35,000 jobs in 20 years. Furthermore, he said, the project will affect all of Rochester’s neighboring towns, including Austin, as people commute to Rochester every day to work at the Mayo Clinic.

“These people won’t all live in Rochester,” Brede said about the potential new employees. “There’s plenty from [Austin] who will come over and take a bus.”

Austinites were very curious about Brede’s thoughts on the project. Brede said Destination Medical Center will be passed by the Legislature, and that would foster more jobs in southeastern Minnesota as companies will have to manufacture more materials and people build houses in other communities.

“I think we will all benefit from that,” he said.

He also realizes other effects the project could have, as area towns’ populations could grow, fueling the need for more schools and social services. Brede has been attending hearings with legislators as details emerge about Destination Medical Center.