Ruth Arleen Nelson, 95, of Waterville, died at the Waterville Good Samaritan Society on Sunday, May 19, 2013, after being a resident at Traditions of Waterville for more than six years. 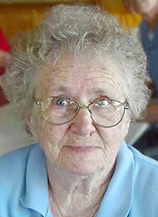 Born in Geneva on March 8, 1918, Ruth was the daughter of Carl and Evelyn (Larson) Lawson. As a young woman she went to school in Albert Lea and graduated third in her class at age 16 – a full two years early. Following her graduation, Ruth was married to Delmar C. Nelson on March 15, 1938. Together they farmed near Clarks Grove for many years. Ruth was a long-time member of the First Baptist Church of Clarks Grove where she was involved in the Naomi Circle. More recently, she recently attended the Evangelical United Methodist Church in Waterville. She enjoyed gardening, playing bingo and cards, watching “Hour of Power,” was an avid Twins fan and was also a voracious reader that could never get enough books. She and Delmar also wintered in McAllen, Texas, for more than 40 years.

Ruth is survived by one daughter, Irene Nelson, of Dallas, Texas; one son, Vern (Linda) Nelson of Waterville; seven grandchildren; 16 great-grandchildren; one great-great-grandchild; and one sister, Edith (Don) Zabel of Wells. She was preceded in death by both of her parents; her husband; one son-in-law, Dick Nelson; and three brothers, Vernon, Donald and Warren Lawson.

Funeral services will be at 11 a.m. Wednesday at the Evangelical United Methodist Church in Waterville, with the Rev. Cindy Kennedy officiating. Visitation will be one hour before the service at the church. In lieu of flowers, memorials should be directed to the Evangelical United Methodist Church in Waterville. Friends and family may also take part in the interment service at the Clarks Grove Baptist Cemetery at 1:30 p.m. Wednesday.