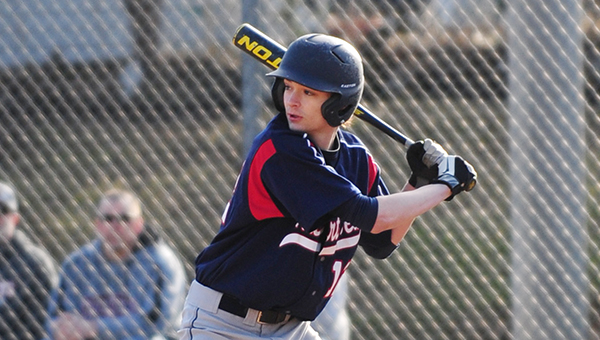 Wyatt Paulsen watches a pitch earlier this season against Austin. In the first game of a doubleheader against Mankato West, Paulsen was one for one at the plate. Paulsen, a sophomore, has been a key contributer in the Tigers’ lineup. — Micah Bader/Albert Lea Tribune

The Albert Lea baseball team dropped one game out of first place in the Big Nine Conference standings with two losses Saturday at Mankato West.

In game one, Albert Lea trailed 5-3 headed into the third inning. However, Mankato West caught fire with 13 runs in the bottom of the third to extend its lead.

“They hit the ball like crazy,” Albert Lea head coach Joe Sczublewski said. “We can’t get behind in the counts.”

Pitching into a 30 mph wind was Albert Lea’s Lucas Hansen, who took the mound for two innings. He allowed four hits and struck out one batter.

In game two, the Tigers started well. They took a 3-2 lead into the second inning, and at the end of three innings the score was knotted at four. However, the Scarlets scored 10 unanswered runs in the final three innings to secure the win.

Makael Lunning led the Tigers on the mound and at the plate. He pitched four innings and was two for three at the plate with two RBIs and one run scored.

Despite its current three game slide on the heels of a four-game winning streak, Albert Lea is tied for second place in the conference standings with a record of 6-4, 6-5.

Winona leads the conference at 7-3, 7-3, and Faribault has the same amount of conference losses as Albert Lea.

Next, the Tigers play a doubleheader at Faribault at 4:30 p.m. today.