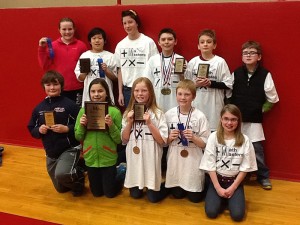 Thirty-seven teams of students competed individually and as teams on eight sets of mathematical problems in this competition. Math Masters is designed to promote excellence in critical thinking skills and problem-solving abilities as well as provide recognition to students for academic effort and achievement.

Math Masters of Minnesota began as a fifth grade math competition in 1989 with teams from 44 schools taking part. In 1995, the competition was expanded to include sixth-graders. This year, there were approximately 5,000 fifth and sixth graders registered to compete. Schools are encouraged to involve as many of their fifth- and sixth-grade students as possible with the use of the Math Masters packet of challenge preparation materials. A team selection test is provided to assist coaches in choosing students to represent their schools.

Teams and individual students from private as well as public schools may compete in Math Masters. The support of companies and foundations for this math competition is essential. Math Masters is supported by the Hormel Foundation as well as many other individuals and businesses.