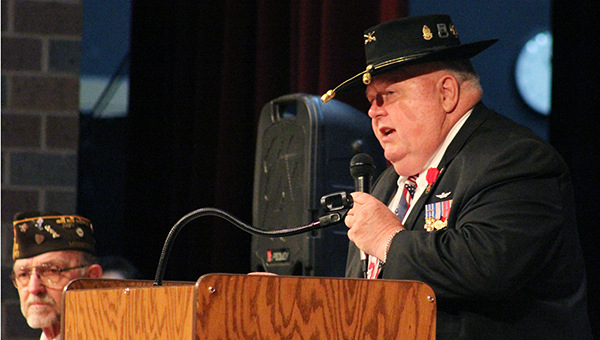 A retired major of the Army living in Alden on Monday encouraged local residents to remember the brave men and women — and their families and friends — who sacrificed their lives to protect the country.

For many people, Memorial Day represents the first day of summer or a day to decorate the graves of loved ones who have died, but it is also a time to honor fallen military service members, said Maj. John E. Barron.

Barron, who has lived in Alden for eight years, gave his remarks to a crowd of at least 200 people in the auditorium of Albert Lea High School, after wet weather forced the annual Memorial Day ceremony to be moved indoors from Graceland Cemetery.

He encouraged veterans to share of their experiences of military service. 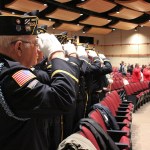 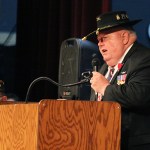 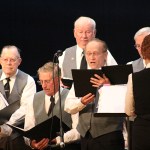 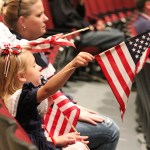 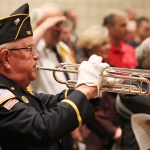 A bugler plays “Taps” Monday at the Memorial Day ceremony in Albert Lea. 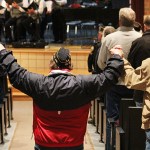 “We need to tell our stories to our children and families so they know what we did,” Barron said.

Drawing on experiences from his own service in the Vietnam War, Barron said he had always wanted to be in the military when he was a child.

He said his father and mother met in the service and were married on Memorial Day. He took pride in marching in Memorial Day parades and was proud of his marching skills, he noted.

After serving in the Vietnam War in the 101st Airborne Division, the parades began to be more difficult, Barron said, noting that he would flinch with each fire of the firing squad and would get choked up each time “Taps” was played because it represented that another soldier had died.

Barron served as a Cobra helicopter pilot while in Vietnam and later trained other soldiers how to fly in Fort Rucker, Alabama. He was one of the teachers of former U.S. Army Chinook pilot Corey Goodnature, a chief warrant officer from Clarks Grove, who was killed in action in 2005.

Albert Lea resident Tina Clapper, who came to the ceremony with her three grandchildren, said she did so because she thinks it is important to teach them about the meaning of Memorial Day.

“It’s not about picnics; it’s about the soldiers,” said Clapper, whose daughter, Amber Steele, participated in the program.