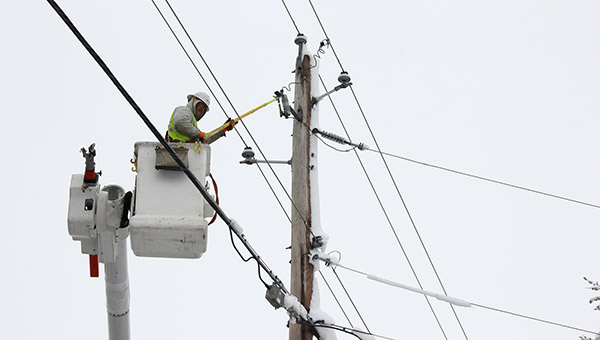 The snowstorm that dumped about a foot of heavy, clingy snow on Albert Lea damaged the power grid in a way that most storms of any kind rarely do.

“The nature of this storm is different than the nature of storms we have had in the past,” said Mary Nelson, spokeswoman for Freeborn-Mower Cooperative Services.

Most storms — whether snow or rain — knock out power in specific places. A pole or two get knocked over and an area of 30 or 50 they serve go out. Some storms might knock over several poles or damage a substation.

Sometimes the heavy weight of the snow would break lines, Nelson said. Sometimes, when the snow would fall off, the line would bounce up and strike another line, causing damage.

Alliant Energy had about 4,000 customers in Freeborn County lose power Thursday at the worst point in the aftermath of the snowstorm.

At most, about 800 customers of Freeborn-County Cooperative Services’ two-county area were out of power.

Alliant Energy spokesman Justin Foss said normally the power outage estimates from the Alliant Energy website are reliable, but on Thursday, they were not.

The numbers indeed went up and down, he said, but not as widely as the estimates would show. He said power supply to customers in Freeborn County was improved Friday noon, with about 100 out of power.

A few customers, Foss noted, will remain without power because electrical equipment on their homes is damaged. Things attached to the house belong to the homeowners. In these cases, they contact an electrician to repair the damage, and the power company cannot connect until the electrician is finished. And sometimes an insurance adjuster needs to see the damage before the electrician can begin.

The company brought in linemen from across southern Minnesota, and they gave priority to repairs that would bring back power for the greatest area.

“We try to bring up lines that will serve the most customers,” Foss said.

He said utility crews came from across southern Minnesota. The storm began Wednesday evening, and by just after midnight Thursday there were Alliant Energy crews out making repairs.

“A lot of them worked 16-hour days in that weather,” he said.

She said linemen were out at 1 a.m. Thursday and worked until 8:30 p.m., finally getting sleep for the sake of safety. They were out again at 5 a.m. Friday.

“They enjoy the teamwork,” she said.

They followed the same strategy: Make repairs that bring power back to the most places. Nelson said they were coming back out to make repairs where one or two places benefit.

Neighbors on the north side of Albert Lea heard a loud bang Friday morning, followed by their power going out.

Foss said a transformer blew. When crews energize a power line, that can expose another problem, he said, such as a tree branch, and the transformer goes out.

He said Alliant was unsure what caused that transformer to go, but it did blow shortly after the power line it was attached to became energized.

Nelson said Freeborn-Mower, as of 11 a.m. Friday, were working to restore power to 284 customers.

“Our crews were hampered by the treacherous travel conditions during the height of the storm,” President & CEO Jim Krueger said. “Additionally, the nature of the storm was such that the outages have been scattered across our entire service territory. Much of the damage is due to downed power lines pulled down by falling trees or limbs. This creates an added concern for public safety, and we strongly urge that people stay away from any downed power lines as they may be or become energized.”

Albert Lea City Manager Chad Adams said city tree crews continue to clean up hanging and fallen branches and trees in the city.
“We will be working staff on overtime to keep going,” he said.