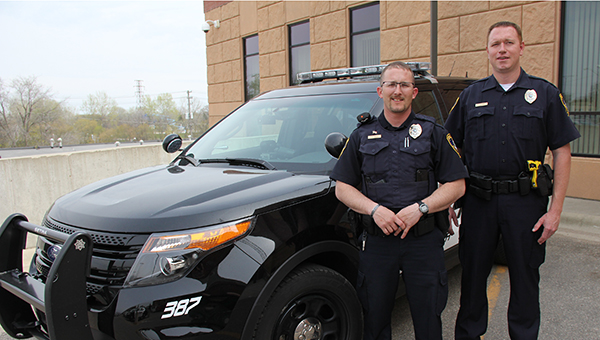 Two new faces have joined the patrol of the Albert Lea Police Department in the last six months after the departure of some of its prior officers.

Melia said he was living in northern Minnesota after completing technical college in 2011 when he saw an opening with the local department and decided to apply.

He brings with him a history in the Marine Corps and National Guard to what is his first job in law enforcement.

He said thus far he has been pleased with the department.

“The officers we have are solid,” Melia said. “The chain of command is pretty squared away, and everyone is easy to get along with.”

Albert Lea Public Safety Director Dwaine Winkels said Melia was identified through the city’s interview process as a good candidate for the department, and he was pleased with his extensive military history and family history of law enforcement.

He moved to the city with his wife, Stacey, and two children after being selected for the job.

The second officer, Todd Deming, said he grew up in southeastern Minnesota. His wife grew up in the Albert Lea area, and the couple and their three children had been living here with their three kids when Deming saw another opening in April and decided to try for it.

He had been commuting to a job with the Prior Lake Police Department — where he had worked for 11 years. Prior to that he worked with the Hennepin County Sheriff’s Office for four years.

Deming said he enjoys the variety of the job and likes having no two days that are the same.

He said the Albert Lea Police Department has a different philosophy about community policing than any of the departments he has been with before and is enjoying learning more about that.

“I hope to provide the best service I can within the parameters of the law,” Deming said.

Winkels said shifts will be changing in June and it will be likely both men will be on the evening or overnight shift.

Interesting fact: Melia visited about a dozen countries during his time in the military.