Where are the bees? 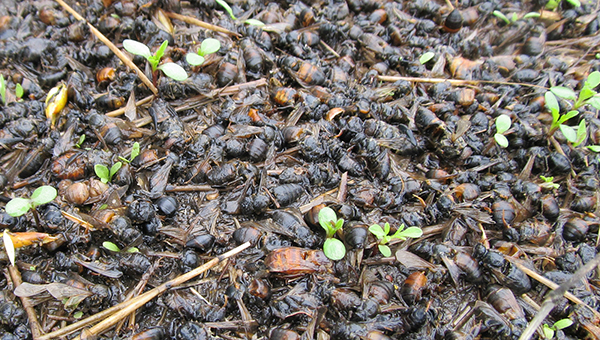 Recent rain created piles of dead bees near hives owned by Steve Ellis in Barrett. He attributes the deaths to neonicotinoid pesticide, which is widely used but is highly toxic to bees. –Dan Gunderson/MPR News

Given that bees pollinate fruits, vegetables and nuts, and pollination is required for about one third of all food production, he should be enthused about their summer journey.

But as Ellis knelt in front of a hive to inspect it, he had cause for concern. Many of the bees were in no condition to pollinate plants and make honey. Indeed, drifts of decomposing bees covered the ground. 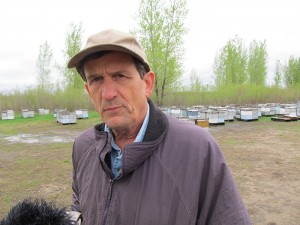 Beekeeper Steve Ellis stands in a bee yard where about 1,300 hives wait to be placed in fields for summer honey production. Thousands of bees recently died, and Ellis blames neonicotinoid pesticides. Ellis expects his hives to be much less productive this year.

The problem isn’t an isolated one. Across the nation, large numbers of bees — about one third of colonies each year — have been dying for the past six years. Scientists believe the cause is a combination of pesticides, disease and poor nutrition, and some are concerned the annual bee losses are unsustainable. As soon as this year, some warn, there might not be enough bees to pollinate some crops.

As Ellis lamented the rotten odor of dead bees, which close to the hive he said “smells like death,” a single bee struggled out of the hive dragging a dead bee.

“It’s actually a good sign some of the bees have enough wherewithal to carry dead bees off now,” he said. “For about a week they were so impaired they couldn’t even carry the dead carcasses out, they just piled up.”