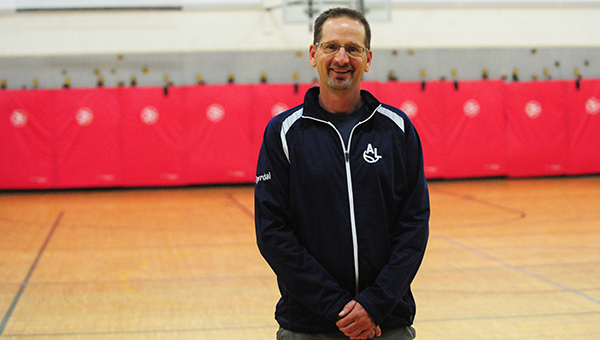 Tom Dyrdal — head coach of the Albert Lea boys’ tennis team and the 2013 Big Nine Conference boys’ tennis Coach of the Year — didn’t amass the most wins in the league, but he is held in high esteem for his teaching and coaching philosophy.

“Tom is an excellent teacher and coach,” Albert Lea High School’s athletic director Chris Chalmers said. “No matter what the sport or class is, he treats all people with class and respect.”

Despite improving on 2012’s 4-11 overall record by going 5-7 and moving up in the conference standings to tie Mankato West at sixth place, Dyrdal is the last person to shine the spotlight on himself.

“Having this honor is really a reflection on the whole group,” Dyrdal said. “It’s not specifically me. It’s also my assistant coach, Matt Levorson, and then it’s really about having a great bunch of guys who worked hard and improved a lot.”

Counting the wins and losses isn’t part of Dyrdal’s philosophy. Playing with character is what counts.

“We expect to play hard and bring a great attitude to the court every day,” Dyrdal said. “Winning is a result of that.”

Part of bringing a good attitude to the court is showing good sportsmanship.

“People see our kids playing the game correctly: making good calls, the line calls, and giving the benefit of the doubt to their opponents,” Dyrdal said. “That’s what made the season so rewarding for me.”

“His team has bought into his philosophy,” Chalmers said. “The members of his team are great ambassadors for our school and the community.”

The Tiger netmen progressed at all positions throughout the lineup in singles and doubles play.

“We were competitive in most matches this year, and I think the kids’ strokes improved along with their knowledge of the game and strategy,” Dyrdal said.

Albert Lea began the season with a 4-2 record, as the Tigers shut out New Prague and Blue Earth and defeated Mankato East and Faribault.

In the conference tournament, Cole Keyeski earned the highest place of any Albert Lea player. He took third place in No. 4 singles. Earning fourth-place finishes were Taylor Herfindahl at No. 2 singles, Darik Weigel at No. 3 singles, and Kyle Zogg and Carter Dahl at No. 1 doubles.

Dyrdal’s road to becoming a teacher and coach began at Albert Lea High School. He is a 1975 graduate. He continued his education at Luther College in Decorah, Iowa, he said.

In 1981, Dyrdal was hired by the Albert Lea school system, where he taught for two years and was cut. He moved to Mesa, Ariz., for three years to teach at Kino High School, he said. Directly following his stint in Arizona, Dyrdal moved back to Albert Lea and has been a Tiger ever since.

Dyrdal has switched back and forth from coaching boys’ and girls’ tennis for about 20 years, he said. He’s had many students, including Jennifer Breitholtz, who is now Jennifer Chalmers, Chris Chalmers’ wife.

Dyrdal has a son, Andrew, 26, who lives and works in Nashville, Tenn. His daughter, Karey, 23, is a hairstylist in Mankato, and his father Andy is 90 years old.