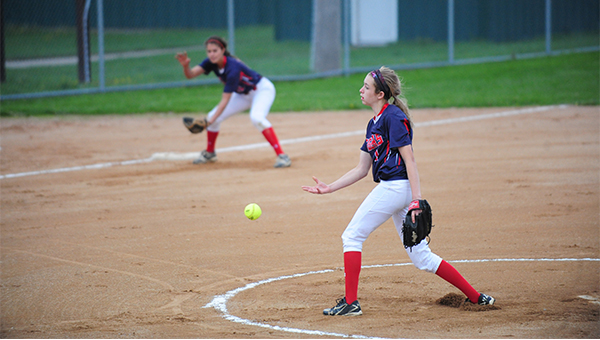 Albert Lea pitcher Haley Harms throws a pitch, as Caycee Gilbertson gets ready on third base in a 5-2 loss to Winona Friday in the second round of the consolation bracket of the Section 1AAA tournament. — Micah Bader/Albert Lea Tribune

AUSTIN — The Albert Lea softball team is hoping to build on a 7-12 record, which included a 2-2 mark in the postseason.

After the Tigers lost Friday 5-2 to Winona in their fourth game of the section 1AAA Tournament, head coach Dan Harms told his players he was pleased with the effort they showed.

“There’s nothing to hang our heads about,” he said. “We had a great season.”

The Tigers began the year with two losses, but after doubleheaders against Faribault and Austin, Albert Lea was 4-2. After a stretch of eight straight losses with three of those by two runs or fewer, the Tigers won three of their last five.

Read about Albert Lea’s win over Northfield earlier on Wednesday on page 2B.

By the final game of the season against Winona, Albert Lea’s defense was clicking.

In the bottom of the first inning, Alexa Wood caught a deep shot near the warning track in center field for the first out. Lindsay Reim made a catch at second base, and Haley Harms struck out the next Winona batter.

Albert Lea scored the first points of the game in the top of the third.

After Harms earned a base hit, she scored on a hit by Kortan to the left field gap.

However, Winona would counter with a run in the bottom of the third, and the Winhawks took their first lead of the game in the fourth.

Bases were loaded with a full count, and Harms walked the batter who was a few feet from hitting a home run in the first inning. Harms struck out the next batter to get out of the inning with minimal damage.

Winona added two runs in the fifth to take a 4-1 lead.

Albert Lea’s final run of the game was scored by Megan Kortan. She hit a lead-off double in the top of the sixth. Kortan stole third and scored on a sacrifice with two outs. Winona added one more run in the bottom of the inning.

Albert Lea catcher Dominique Villarreal is the only senior on the roster, and she was happy to play alongside this year’s group.

“It was really emotional, going into the game knowing that it could be my last,” Villarreal said. “But, the girls gave it a good effort, and I’m proud of them.”

Villarreal plans to play catcher at the University of Wisconsin at River Falls, and she will play summer softball with the Albert Lea U18 squad.