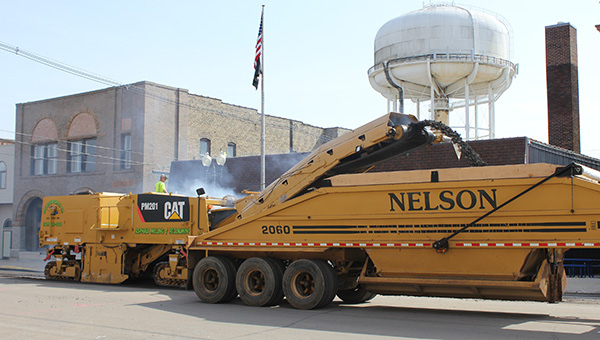 With an America flag and a city water tower in the background, an asphalt-milling machine shoots little pieces of Broadway into a trailer in downtown Albert Lea. The machine belongs to Rochester Service Co. The trailer and the truck pulling it belong to M.J. Nelson Trucking of Albert Lea. –Tim Engstrom/Albert Lea Tribune

After months of planning by city officials and community members, construction crews began work Wednesday on the reconstruction of Broadway in downtown Albert Lea.

Starting on the north end of Broadway, near the road’s intersection with Fountain Street, the crews began removing the existing concrete road through Water Street.

It was the first day of many slated for the more than $4.5 million reconstruction project. 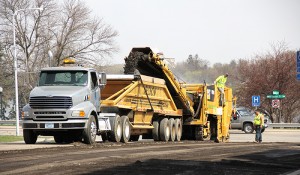 “The Broadway project is a signature project for the community,” said Albert Lea City Manager Chad Adams. “These opportunities to shape a downtown’s character only come about every 50 years or more.”

Adams said he is excited to see the project move forward and said he thinks it will help revitalize the downtown into “a destination area.”

He said before he started as city manager the project was in its conceptual stages and was being promoted as one of the primary projects the city manager would work on to implement for the community. 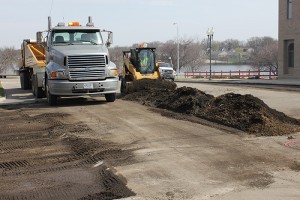 Another truck and trailer wait their turn to haul away milled asphalt Wednesday on Broadway in Albert Lea. Crews began tearing up the street as part of a plan to reconstruct Broadway. –Tim Engstrom/Albert Lea Tribune

“I thought the project reflected a progressive approach to revitalize the downtown, to preserve the downtown’s historic character, and certainly attracted me to the community both professionally and personally.”

The project includes the replacement of the street, sidewalk and underground utilities on Broadway from Fountain Street to Main Street. Decorative lighting, crosswalks, kiosks, trees and tree grates will be added, along with basic pedestrian plazas at William and Water streets.

Fountain Lake Park at the north end of Broadway will also undergo a reconstruction with the addition of a grand staircase leading from Fountain Street to a sidewalk promenade in the park, a wheelchair-accessible sidewalk and a new boat dock on the lake. 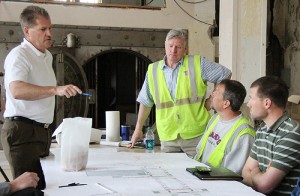 Dan Sarff, Bolton & Menk project engineer, left, speaks Wednesday during the first of many weekly construction meetings scheduled to take place this summer during the Broadway reconstruction. The meetings are open to the public and take place at 9:30 a.m. on Wednesdays in the Freeborn National Bank building. –Sarah Stultz/Albert Lea Tribune

The project came out of a need to replace aging infrastructure.

Adams and other city officials, engineers with Bolton & Menk and crews with BCM Construction of Faribault, met Wednesday morning for what will be the first of several construction updates.

The crews will give updates at 9:30 a.m. Wednesday weekly on the project at the Freeborn National Bank building. The public is invited to attend.

Scott Parker, project manager with BCM Construction, said crews will spend two days removing concrete on Broadway from Fountain to Water streets and starting Friday they will be cutting the existing sidewalk in half on that portion. A fence will be put up around the sidewalk as a safety precaution.

Crews will be working five days a week, starting at 7 a.m., weather permitting.

Work on Fountain Lake Park and the North Broadway parking lot will come after the Fourth of July.

Crews are expected to begin work on the second section by June 1, said Parker. The entire project is expected to be completed by the end of September, except for the park and parking lot, which should be done by mid- to late October.

Detours have already been set up directing people away from Fountain Street at Washington Avenue and on Broadway from Water Street to Fountain Street.

“This will be quite an impact for the business owners,” said Dan Sarff, project engineer with Bolton & Menk. “We want to make things as easy as we can for them.”

Bolton & Menk will provide updates on the project online at albertlea.weebly.com.