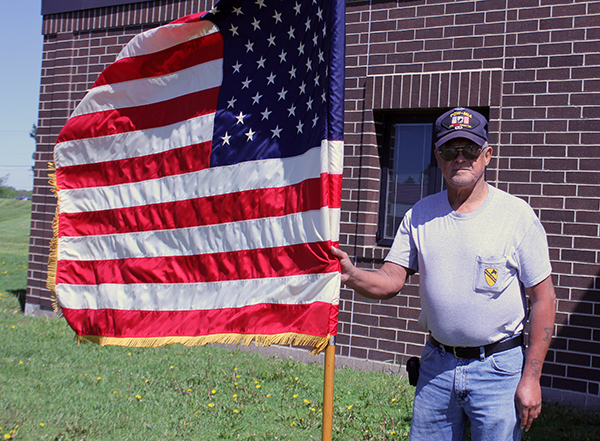 Memorial Day can be tough on some veterans, but one Albert Lea man just tries to keep busy and do his part to help with events.

Jose Avelar is an Army veteran who completed four tours in the Vietnam War after entering the service in 1966. He said it’s hard for him to talk about his time enlisted, and even though he’s a decorated soldier, he doesn’t consider that to be particularly impressive.

“Memorial Day is hard for me,” Avelar said. “For me, everyone else is a hero.”

He likes that the community gets together to remember veterans and their sacrifices, but the day also brings up powerful memories.

“I feel like I cheated the guys that didn’t come home,” Avelar said.

Avelar, who was born in Texas and moved to Albert Lea at age 2, joined the Army in 1966, went through schooling and volunteered to go to Vietnam. He originally planned to do just one tour, but in an effort to keep his brothers out of the war he volunteered for two more tours.

“I just stayed there,” Avelar said. “I figured I knew what was going on.”

Avelar said he was part of LRRP, or long-range reconnaissance patrols, in the 1st Brigade of the 101st Airborne Division, where soldiers would go out and look for enemies and be the eyes and ears for units. Avelar, who is the oldest of 12 siblings, was the first in his family to join the military. Likely following his lead, 6 of his 11 siblings joined the military.

After two years in Vietnam, Avelar left in 1969 and was home for three months. It wasn’t long before he wanted to go back.

“I just didn’t feel like I was doing enough,” Avelar said.

He served in the Special Forces. He later was a door gunner in a helicopter with the 1st Squadron of the 9th Air Cavalry. He toured with the 62nd Security & Recon.

Finally in 1972, he came back to the U.S. again and spent time in a stateside unit. An Army veteran, he also was an Army Ranger and part of the National Guard during his career. After leaving the military he came back home and worked for several years before medical problems starting appearing. Serving on reconnaissance patrols means he was around a lot of Agent Orange, and he guesses that’s why he’s had his health problems. He now has diabetes and has had heart attacks, kidney failure and other problems.

“I take medication and then there are good days and bad days,” Avelar said.

Avelar is a member of the Albert Lea American Legion, quartermaster of VFW Post No. 447, adjutant of the Albert Lea chapter of Disabled American Veterans and volunteers when he can with other groups like the Albert Lea Beyond the Yellow Ribbon and a Vietnam veterans group of Faribault that raises money for homeless veterans. He has great pride for the American flag and will remind businesses or homeowners to replace their flag if he sees that it’s tattered.

He will be attending the Memorial Day events in Albert Lea and said he likes feeling as if he’s helping the community. Avelar understands that some veterans don’t feel like talking about their service. For him, having breakfast with other veterans each day is therapeutic even though the group never talks about war.

“For me it’s therapy,” Avelar said. “But you never forget.”