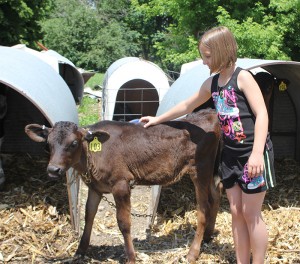 She has been in 4-H for three years and enjoys making crafts at meetings, but when she was crowned Milk Maid this year she was very excited.

She has always wanted to be Milk Maid. Jacobs will be in parades and other events as part of her duties for being Milk Maid.

Jacobs says she will do her best.

She hopes to be Dairy Princess someday but for now, Jacobs shows her dairy cows Ice Cream, Ginger and Sweetie.

“You have to practice a lot,” Jacobs said.

Jacobs has to feed and scrub her dairy cows to get them ready for show, and it’s a lot of work.

Jacobs says sometimes she gets nervous but when she does she just thinks about how fun it really is. 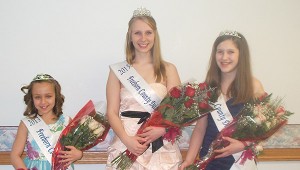 Jacobs enjoys walking her dairy cows and recently had two calves born: one last winter and one last spring. She has just as much fun with them as she does with her dairy cows.

The 2013 Freeborn County Dairy Princess will again be Hailey Johnson.

“It has been an honor to serve as the 2012 Freeborn County Dairy Princess,” Johnson said. “It has been especially fun to be able to have my little sister, Aubrey, serve alongside me as Milk Maid.”

Johnson is attending the University of Wisconsin-River Falls and majoring in dairy science because she would like to attend veterinary school in the future.

Hailey and Aubrey are the daughters of David and Kristine Johnson.