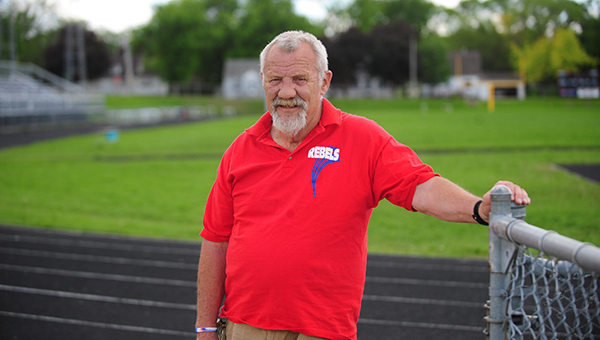 Kent Viesselman is about to wrap up his 100th season as a head coach. He is the United South Central/Alden-Conger’s boys’ and girls’ track and field coach in the spring. He coaches USC cross country in the fall, and he has coached basketball in the winter. –Micah Bader/Albert Lea Tribune

Viesselman of USC High keeps on guiding athletes to success

WELLS — After Amanda Allis makes her final throw of the shot put at the state track and field meet, Kent Viesselman will have completed his 100th season as a head coach.

Over a span of 49 years, the 70-year-old United South Central High School coach of multiple sports has been a consistent winner.

“I don’t think many coaches can say they’ve done that,” he said with a smile.

He has been the Section Coach of the Year 27 times, leading his teams to 21 section championships. The list goes on and on.

But it’s not just the mountain of awards that impresses USC Athletics Director Sue Summer.

“I admire the respect that he gets from his kids, the way he runs his program and its success,” she said. “The kids just seem to want to perform for him.

“During the season, they’ll just sit and visit. They’ll be quiet and listen to him. It’s just amazing in this day and age.”

Originally from Blue Earth, Viesselman began to compete in track when he was in eighth grade on orders from his father. Viesselman’s father, a former football player, hoped it would help when the fall season rolled around, he said.

Viesselman’s father and Bud Myers were two key people who inspired Viesselman to participate and coach track and field, he said.

Bud Myers was Viesselman’s college track and field coach at Minnesota State University, Mankato, where he ran the 400- and 800-meter dash. Myers Field House was named after him.

“He was pretty hard core,” Viesselman said. “He was one of those guys you either loved or hated. I just happened to love him, and I learned a lot of things from him.”

Viesselman’s coaching career began at Lamberton High School. He coached four sports during his six-year tenure before accepting a job at Wells-Easton High School in 1970. Viesselman stayed in Wells 22 years ago, when the school changed to United South Central. His 100 seasons of head coaching experience include 49 seasons of cross country, 49 seasons of track and field and two seasons of basketball.

Viesselman’s favorite part of coaching is seeing his athletes improve.

“It’s great to watch the kids grow, seeing how they change from the time they’re a freshman to when they’re seniors,” he said.

Under Viesselman’s tutelage and with 31 returning letterwinners, the Rebel boys and girls have persevered through injuries to win the conference and subsection meets.

This year, at the Gopher Conference meet, the girls won nine events and beat the second-place team by 50 points. The boys won six events and beat runner-up Bethlehem Academy by 70.5 points.

The Rebels continued their winning streak at the Subsection 5A track and field meet. The girls’ team beat the field of seven with 190 points, while the boys’ edged Waseca by four points to win the title.

At the Section 2A meet, Amanda Allis and Emily Mantor qualified for state. Over the course of his career, Viesselman has helped 157 individuals in 132 events (including relays) qualify for the state track and field meet.

Viesselman retired from teaching 14 years ago, but he is hoping to be back for more coaching.

“I’m taking it a year at time as long as I’m still having fun,” he said. “I’m tentatively planning on coming back next year.”