Two Albert Lea musical artists, Miles Erdman and Tyler Shaw, will perform at the Chanhassen Dinner Theater on Friday. The duo is part of a show called Midwest Talent Mashup.

Shaw and Erdman rap, but their music styles can vary. This is their first performance out of town. They have performed at Water’s Edge and Tigers Roar prior to this event. 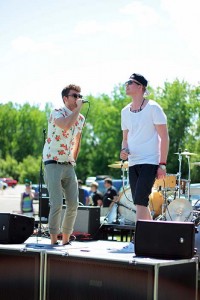 Campos, an Albert Lea High School graduate, helped Erdman and Shaw, both 18, record their first CD, “XIII Dreams.” He also told the people in charge of the show about the duo, which is how they got their spot in the show for this year.

“I’m excited for the type of crowd,” said Shaw. “We’ll have different speakers and sound systems than we’re used to, too.”

“Most of the songs we’ve never performed before,” Erdman said.

On stage, Erdman goes by Adam Quincy and Shaw by T-Shaw. They will be performing new songs from their new album, which is slated to be released at the end of July and will be titled “Fate.” The two also said they’re excited because it’s a chance for people who don’t know them to hear them. There will be about 10 other artists at the show.

Making rap music isn’t the only thing the two will do with their future. Erdman plans to attend a college for music. Shaw will model for Ignite Models.

The Midwest Talent Mashup is for an audience of ages 18 and up. Doors open at 8 p.m., and the show will start at 9:30. Tickets can be bought in advance from either Erdman or Shaw or at the door for $10.

The duo said they hope to sell out of tickets and hope many people buy tickets from them.