This past week, I headed north with my brother-in-law Ron Johnson to his cabin to help with his dock and do a little fishing. Mark Runden, a friend of both Ron and mine, went with us. The first part of the week was rainy, windy and cold, but we managed to get his dock in and also get the old dock, which Ron was nice enough to give me, ready to haul to my cabin, which is a little farther north. 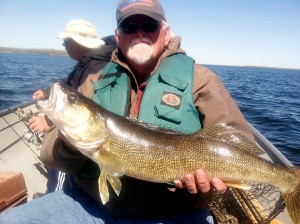 Because it was raining and fishing wasn’t looking like much of an option, Mark and I decided to take the old dock to my cabin. On Wednesday, the weather finally broke and we were off to try our luck at Woman Lake. The fishing wasn’t proving to be hot and heavy, but we did manage to catch a few small walleye and some northern.

The next day we had planned to head to a little lake north of Leech Lake to try our luck. This little lake came with some pretty good history, because it had been featured on a couple of Al Linder’s fishing shows. The little lake didn’t produce many fish on this day with the exception of a few northern and a dandy largemouth that I caught and released.

Ron had been telling us how he had just about given up on Winnie, because he hadn’t had much luck the last couple of trips that he had taken to that large body of water. After fishing most of the morning with no walleye boated, Ron hinted at going to Winnie, but I reminded him of the statement that he had made earlier. So, we decided to try Leech.

It was actually a good day to fish the big lake, because the wind was just about perfect for drifting. Now I do not consider myself a hardcore walleye fisherman; I guess you could say that I fish and hope for good results. Ron, on the other hand, knows how to fish walleye, and I was confident that if anyone could put us on fish, it would be him.

After launching the boat at the access near Battle Point, we headed west to the spot that Ron thought would be an ideal place to try our luck. On the first full drift, Ron landed a 22-inch fish. In afterthought he said we should have thrown out a marker. I reminded him that he caught the fish quite a ways back, but he could do it on the next one. On the next drift, Ron had one hit his bait, only to have it on for a brief moment and let go. He said, “That was a big fish.” I responded jokingly “If you don’t see it, then it can be as big as you want.” At that moment, I had a big one on the line. After about two minutes, Ron saw the fish and said it was a big walleye. It probably took about four or five minutes before Mark had it in the net. It measured a little over 28 inches. After getting it unhooked and a couple of pictures, I released it to the big lake to fight again for another day. That fish was a personal best walleye for me and an experience that I won’t forget. Ron has told the story a few times since then, and for some reason, it always seems to sound like I wouldn’t have caught it if he hadn’t had that fish on first. That’s fishing with Ron: it usually includes a little good-natured ribbing which works both ways.

As the day went on, we caught six fish in all, and mine was the only legal keeper, because the rest were in the 20 to 23 inch range. Ron caught the most at three, followed by Mark with two and I settled for quality not quantity with just that one. Leech Lake has a slot limit where any fish from 18 to 26 inches must be returned to the lake. We actually didn’t fish all that long, but we managed to catch some nice fish in that short time. With the decrease in walleye numbers that the lake had experienced a few years ago, I get the feeling that the lake is definitely back and as good as ever.

I last fished the lake in 2007 during the Governor’s Fishing Opener. The focus at that time was on the resurgence of the walleye fishing on the lake, and since that time I have heard from many sources that the fishing has been very good. I know that it must have helped when the Department of Natural Resources thinned out the cormorant population a few years back. Thanks to Ron, I had a chance to see first-hand how good the fishing actually was. To me, catching a personal best walleye was great, but boating that many nice fish in just a few short hours was enough to convince me that Leech is once again a top walleye lake.

Once again, I have to report that there are some good fish being caught throughout our area. Fountain is still producing northern, while there have been some nice crappie and walleye caught on waters in the surrounding area. Look to streams or rivers of the area and try fishing a jig and a leech, which seems to be doing the trick for the walleye in the fast running waters brought on by the rain.

I have to wonder if the high waters would make fishing New York Point a good option. It seemed to work a few years ago when we had a lot of rain and the waters were high.

Until next time, get out and enjoy some fishing in one of our many lakes and streams of the area.

Please remember our service men and women who serve our country so that we may enjoy the many freedoms that we have today.